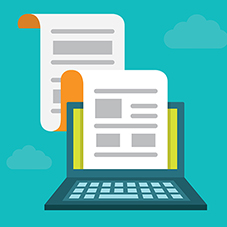 When lawyers and law firms get focused on “creating content” (for those of you living in caves, that's what "writing" is now called), they think mostly about the subject matter. And that makes a lot of sense, for obvious reasons. But often forgotten is how to get that content in front of the intended “audience” — as "readers" are now known. In the good old days, law firms distributed their content by the U.S. Postal Service: Copies of lawyer-authored articles and newsletters were stuffed into envelopes, labeled and then run through the closest postal meter. But this once-bedrock activity of legal marketing hit its peak sometime near the end of the last century. Marketing assistants and mailroom clerks everywhere are not sad that this era is long gone. Content Syndicators Make It So Easy. We now live in the time of digital distribution, usually via email. But the inherent and entirely predictable problems of law firms (mis)managing their email lists has led to the emergence of “content syndicators” or “content aggregators” specifically for lawyers and their firms. ... READ THE REST