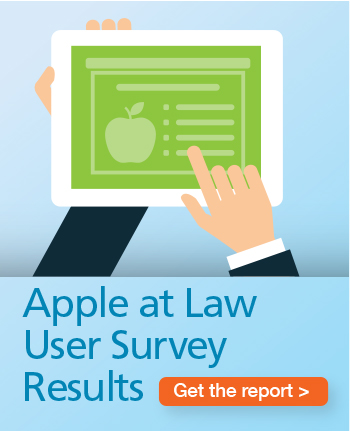 This fall, Attorney at Work collaborated with MILOfest to conduct the “2015 Apple at Law Users Survey,” aimed at getting a snapshot of how law firms are using Apple products. We asked Tom Lambotte, CEO of GlobalMac IT and one of the MILOfest conference and survey organizers, to run us through the results and point out the highlights. Be sure to download the full highlights report PDF, too.

This year’s Apple at Law User Survey revives the annual tradition begun with Clio’s “Apple in Law Offices” survey, conducted from 2010 to 2013. The 2015 Attorney at Work survey drew 339 respondents from firms of all sizes, and the results show some interesting statistics.

It’s no surprise that use of Apple products in the legal market continues, but it is amazing to see the continual growth.

Of the individuals responding to the survey, 27 percent were solos, 44 percent had between 2 to 10 employees on staff, 18 percent had between 11 to 50 employees, 6 percent employed 51 to 200, and another 5 percent were in large firms of more than 200. The spread among these numbers confirms that Apple products are being used in larger firms — not just in solo and small law offices. 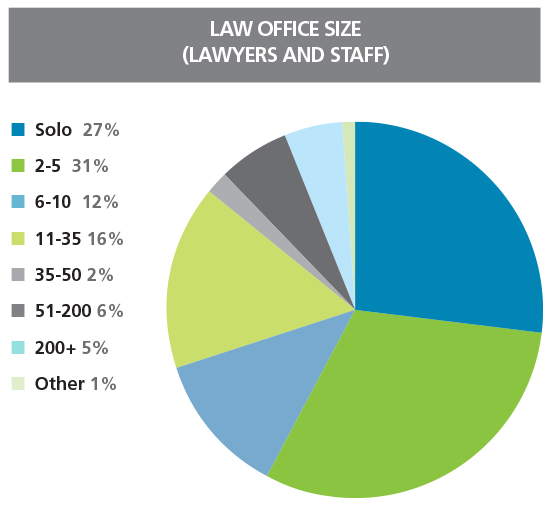 All Mac or a Mix?

Almost one-third (29 percent) of the respondents were 100 percent on Macs in their law firms, which is not shocking considering the dramatic advancements made possible by cloud-based platforms and software-as-a-service (SaaS). This is a major shift from five years ago when the Apple platform had very limited options in areas such as case management, document assembly, and time and billing software.

Now, with more and more software becoming platform agnostic (meaning it will run on any operating system), I predict we will continue to see the number of all-Mac offices continually increase, year after year.

A full 22 percent of respondents reported using a mix of PCs and Macs, further confirming my point. One of the biggest benefits of SaaS is that firms can give their employees a choice of which platform they would like to use. It also makes it possible to test out a couple of Macs in the office before eventually making the full switch. Often, we encounter a managing partner wanting a MacBook Air, testing it out, falling in love, and then pushing the full migration to Macs in the office.

Another 27 people (8 percent) reported being the only Mac users in their firm. I foresee these trailblazers — along with the mixed PCs and Macs firms — playing a big role in the coming adoption of all-Mac law offices. In fact, we just signed a client with a 15-person firm, where it started with one attorney bringing in his Mac a couple of years ago. They gradually converted and are now on Apple 100 percent.

A Spike in New Users

It’s interesting to compare some of the results from the last Clio survey to the 2015 numbers. Clio’s 2013 Apple in Law Offices Survey reported that 44 percent of respondents had been using Macs for more than three years, while 2015 survey results came in at 50 percent. The biggest difference is new users: In 2013, only 9 percent of respondents had been using Macs for less than a year. That number almost tripled among respondents to the 2015 survey, at 26 percent, pointing to a big spike in increased Mac usage in law firms. 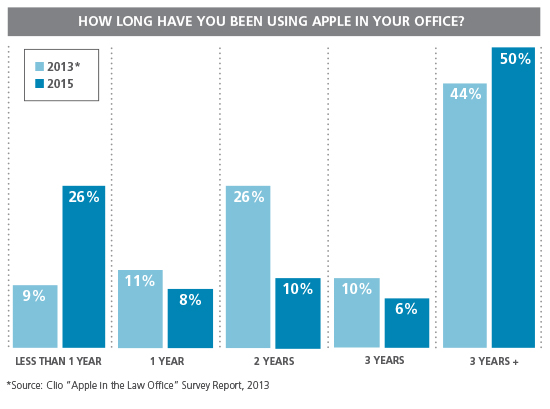 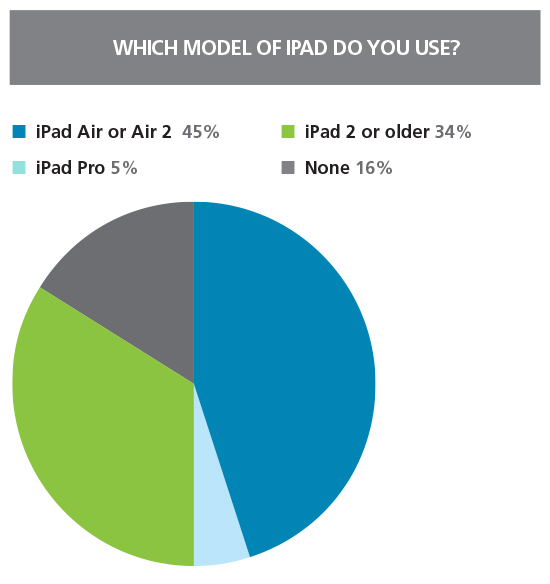 As for the specific iPad model in use, 45 percent say they use either an iPad Air or the iPad Air2. The brand new iPad Pro, just released on November 10, came in at 5 percent. Keep in mind, this survey closed on November 23, so a 5 percent adoption rate in the first two weeks is quite impressive! The older models are still heavily in use, with a third (34 percent) of respondents using an iPad2 or older. This speaks highly to the long, usable life span of the iPads.

Moving into desktop computer use, the iMac was the most popular desktop model among respondents, with 62 percent of the Mac desktop share. It is hard to beat the all-in-one lines of the iMac. The other two options were the Mac minis at 23 percent and the Mac Pros at 14 percent.

I had expected the Mac mini’s use to be higher and to see less of the Mac Pros. These results may be swayed by the respondents since the survey asked what kind of Mac the respondent was using — not the overall number and types of Macs used firmwide. We frequently see attorneys using iMacs while support staff use Mac minis. The Mac minis are a great option for firms switching from PCs that already have newer monitors and keyboards and mice.

As for laptops, I expected to see a higher percentage of MacBook Airs. (I love my 11-inch Air). A third of the respondents reported using MacBook Airs (32 percent), with over half (58 percent) using MacBook Pros.

While I personally believe the MacBook Pros are overkill for most lawyers, no other laptops had retina screens up until the recent introduction of the new MacBook. I think that was a big reason for the high percentage of these. I forecast an increase in MacBooks and MacBook Airs over the next year.

Talking again about the early adopters, the new MacBook was released on April 10, 2015, and 9 percent reported using these devices — consistent with that 10 percent early adoption rate for other devices.

Apple’s new market item, the Apple Watch (not the iWatch), again hit that 10 percent early adopter mark, coming in at 11 percent. Looking back at the introduction of the iPods, iPhones and iPads, the first year’s sales tend to be a bit slow, with adoption rate striking up tremendously in years to follow. I’m excited to see where this number will be in next year’s survey!

We also polled users about why they chose to use Macs. The top two reasons, both chosen by more than 70 percent of respondents, were usability and reliability. The third most popular reason was security, followed by aesthetics and familiarity.

“Usability” typically refers to ease of use and the user interface (UI). For the most part, Apple and Windows operating systems have the same features. It’s the UI that makes all the difference in the world. If you don’t know how to access or use a feature, you won’t use it. If you are not comfortable and confident in doing a certain task, you won’t do it.

I think this is why the “halo effect” is so dominant with Apple products. The first time someone uses an iPhone or an iPad, they often have that “aha” moment, where they react with: “Wow, this is SO easy.” When someone experiences this they eventually wonder, “Can this happen on my computer, too?” So they buy more Apple products, and, in time, move towards switching their firms to Macs.

What Software and Apps Do Mac-based Lawyers Use?

The survey also asked lawyers whether they use software and apps in these categories: practice management, document management, time and billing, accounting, and project management, as well as what particular products they use.

Practice management. Among those who identified a practice management application, Clio was the most popular, with Rocket Matter and MyCase tying for second. After these, Amicus Attorney, CaseManager and Daylite all had around 5 percent of users. The “other” option turned up an interesting range of products in use, from custom systems to workarounds for PC-based systems to those using general business apps like Google and Evernote. Time Matters was among the most popular “write-ins.”

However, 36 percent — one out of three respondents — don’t use any type of practice management software at all. Based on my experience with Mac-based law firms, this sounds about right, and these results reinforce my belief that many firms are still not properly leveraging the tools available to maximize their practice.

Document management and file storage. A whopping 60 percent of respondents reported using Dropbox. After Dropbox, Google Drive was a distant second at 27 percent. Still, this was much higher than I anticipated. Based on my experience, not one of our Mac-based law firm clients use Google Drive. In third place was Box.

As a side note, if your law firm is classified as a “business associate” under HIPAA rules and you are using a Dropbox Pro or Business account, you are not HIPAA compliant. Until recently, Dropbox would not sign a BAA. On December 2, 2015, they introduced Dropbox Enterprise, an additional higher-level tier — and the only tier where they will sign a BAA. Google will sign a BAA, as will Box, but also only on the Box Enterprise plan, which has been out for two years.

Document drafting and production. Microsoft continues to lead the way with 91 percent of respondents using Microsoft Office apps. Of those, 22 percent are already using the 2016 version, which mirrors the recent uptick seen elsewhere in the adoption of Office 365. Apple’s Pages, in the iWork suite, was in use by 17 percent of respondents. For working with PDFs, Acrobat continues to lead with 55 percent of users; 12 percent use PDFpen, and 10 percent use Apple’s built-in Preview application. An unsuspected contender was WordPerfect coming in at 1.4 percent.

For those running Windows on their Macs, the most popular applications were Microsoft Office, HotDocs, Quickbooks and Adobe Acrobat.

(For a deeper look into the software results, download the full survey highlights report.)

The survey asked the open-ended question, “What do you feel is the best part about running a Mac-based practice?” Here are a few of their answers:

I find that people usually make decisions based on emotion, then justify those decisions with logic. Chances are, if you own an Apple product, you’ve already had good experiences with Macs. Perhaps you’ve been holding off switching your law firm over to Macs because you felt it couldn’t be done, or maybe you still think Macs are just for graphic designers and photographers. As you can see in this survey, plenty of law offices are using Apple computers.

Many Mac-using attorneys don’t even know of its existence, but there is a legal technology conference specifically designed for Mac-users. MILOfest (Macs-In-Law-Offices) and has taken place at Walt Disney World in Orlando since 2010. Of the 2015 Apple at Law survey respondents who had previously attended MILOfest, 74 percent rated it an 8 or higher on a scale of 1 to 10. For more details on MILOfest 2016, go visit the Milofest.com site.

Attorney at Work’s report on the survey highlights is available for download, here. 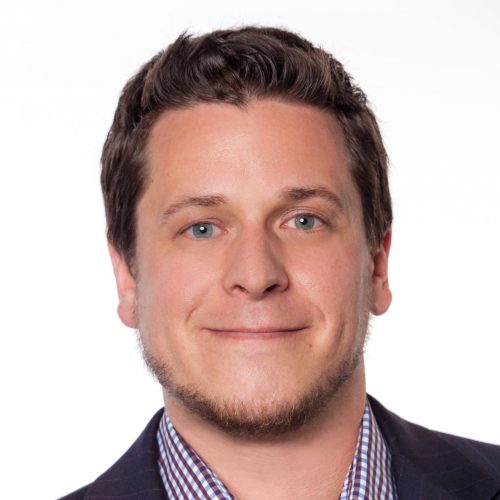 Tom Lambotte is the founder and CEO of Security+, a turnkey, comprehensive security suite to stop solo and small firm lawyers from getting hacked. He is also CEO of GlobalMac IT, a nationwide managed service provider for small to midsize law firms that use Apple technology. Tom provides leadership to transform law firm operations, boost profits and reduce the risk of cyberthreats by leveraging technology. The author of the ABA book “Macs in Law,” he also authored “Hassle Free Mac IT Support for Law Firms” and “Legal Boost: Big Profits Through an IT Transformation” and has written for numerous leading legal publications. Follow Tom on Twitter @LegalMacIT.