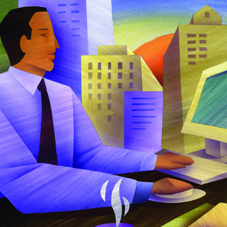 In their written communications, lawyers need to use the right words and the right number of words in the right way. If you circumvent your content, malign your meaning, dangle your modifiers or otherwise mangle your sentences, you might very well alienate your partners, anger your clients or annoy the judge and jury.

If you can write clearly, concisely and correctly, you can impress your partners, engage your clients and win over the judge and jury.

So they pad their prose with jargon and verbiage. For example, instead of simply writing “verbiage,” they might write, “excessive verbiage that they don’t need.”

Consequently, Kinder teaches lawyers to strive for economy in their written communication. He and a team of engineers also developed a software program called WordRake, which does what it sounds like it does: Rakes prose of its superfluous words. Some 2,500 law firms — from international behemoths to solo practitioners — are using the writing and editing tool.

Tips to Help You Immediately Improve Your Writing Skills

1. Put yourself on a “That” watch. “Whenever you see ‘that,’ remove it,” he advises. “If the sentence still sounds right, leave it out; if the sentence sounds awkward, put it back.” Sometimes “that” lives in a cluster of extraneous words. Don’t write “due to the fact that” when you can write “because,” which pares your prose from five words to one.

2. Some prepositions foster excess so take notice. Kinder tells those he instructs to look for the word “of.” “I tell them to look for ‘of’ because half the time we can get rid of it and some words around it,” he says. “The classic example for a lawyer is: ‘The terms of the contract state….’ You don’t need both ‘terms’ and ‘contract.’ Just use one of them.”

3. Be on guard for “in” because sometimes it, too, harbors slackers. Kinder wants writers to consider how the preposition “in” accommodates verbal baggage in the following sentence: “We are all in significant agreement as to the proper tax allocations.” Yuck. You know you’ve seen this sentence and perhaps you’ve written it. Try this instead: “We all agree on the proper tax allocations.”

As clients increasingly want — demand — their legal services to be delivered efficiently, lawyers would be wise to tighten up their writing.

Editor’s Note: In the second part of this article, Kinder gives advice concerning the first three sentences of any client correspondence. Watch for it next month.


Steven T. Taylor is an award-winning journalist living in Portland, OR, who has written about the legal profession for nearly 20 years. He’s also a college professor who teaches nonfiction.