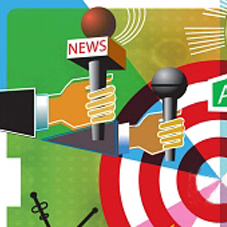 “I won’t dignify that with a response” may sound very “Downton Abbey,” but it won’t get you far when dealing with a potentially reputation-damaging crisis. Still, many litigants and their lawyers choose to handle a crisis that way, which is not only ineffective but perhaps more harmful to your client’s reputation (and yours) than the crisis itself.

Here are a few rules for what not to do in such situations — what I call the “three deadly sins” of crisis PR for defendants and their counsel.

1. Saying “No Comment.” A “No comment” response is comparable to admitting guilt in many people’s minds. It also creates a void that outsiders and opponents gratefully fill to the brim with rumors and allegations.

Often lawyers tell their clients not to talk to the media, or perhaps the court has placed a gag order on the proceeding. Untrained parties and their lawyers will typically respond with the ubiquitous “No comment” because that is what they have heard so many others say before them. But lawyers and their clients have to develop a strategy not only to win in the courtroom but also in the court of public opinion.

There’s always something you can say to soften the impact. If the accusation is untrue, say so. If you’re unsure, tell the media that everything they need to know will become public soon and that you will get back to them. Then make sure you keep your promise.

2. Rambling on. People have a tendency to ramble to fill silence. This is natural, but it can be fatal when a situation demands sensitivity. Instead, stick to the two or three points that are most important to you. Stop when you have made your points. Wait for reporters to fill the silence with more questions. (They will.) Turn those questions to your advantage or back to your main points.

Ever notice during political debates that effective candidates keep drilling in the key messages of their campaign? It’s when they go off-script that bad soundbites get picked up.

3. Taking the DIY route. It’s hard for anyone not to take personally an attack on his or her reputation, and that makes your client the worst judge of whether a public relations strategy is viable — whether you’re trying to shift the spotlight or have the client disappear from sight. Some very intelligent and capable people have tried and later regretted not letting their lawyers decide when and how to speak publicly. The lesson they learned belatedly? That doing it yourself often ends up messier and more expensive to fix.

Lawyers who regularly handle high-stakes litigation that could ruin a client’s name or livelihood often bring in a crisis PR expert as part of the trial team. This serves two purposes: First, communications are covered under the attorney-client privilege. Second, when the media comes calling (and they will) a complementary legal and PR strategy is already in place. This allows you and your client to respond confidently to media questioning armed with well-conceived talking points. Calmness under pressure. That’s true dignity.

Eden Gillott Bowe is President of Gillott Communications LLC. Eden has nearly a decade of experience resolving PR issues both in and outside the media’s glare, from celebrity scandals and corporate fraud to criminal and civil litigation. Educated in business and communications on three continents, Eden has worked in Seoul, Manhattan and Los Angeles as a crisis manager and business professor. She is co-author of “A Lawyer’s Guide to Crisis PR” and the upcoming “A Board Member’s Guide to Crisis PR.” She tweets @CrisisPRguys!