Are We Making Money?

Is this client profitable? How do you really know? Profitability has for too long been measured based solely on metrics like hours worked, revenue and realization. Although those metrics are components of an overall client profitability picture, they do not tell the whole story. Client profitability in its simplest form is how much revenue a firm receives versus the cost it incurs to produce that revenue. But it is really influenced by many variables.

The Profitability Equation, While Complex, Can Be Calculated

Revenue. All revenue is not the same. First, there is revenue received, and then there is revenue accrued. In a cash-based accounting model, you must be mindful to associate the costs with the work that produces the revenue. Many firms fail in this exercise. Instead they tie revenue collected to costs associated with other work. It is the equivalent of comparing apples and oranges. 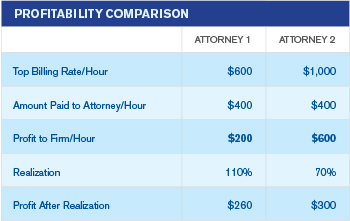 Realization and costs. Firms often use realization as the key indicator of profitability. Realization is generally calculated in relation to the top billing rate. However, this rate may not be set correctly and, as a result, may lead to the wrong conclusions about the profitability of an individual attorney or client. For example, look at the chart (right) comparing two attorneys who “cost” the same.

There are many other quantitative indicators besides realization that can help you examine client profitability, including hours worked and total revenues. Other common metrics include leverage, time value of money, cross sold percent and, of course, costs and margins. If you only look at realization rates, you would conclude that Attorney 1 is more profitable than Attorney 2. But you simply cannot look at one side of the equation (revenue) without looking at the other side (cost), and the difference between them.

Qualitative metrics. When making decisions based on the profitability of a client and whether the firm should continue to grow “share of wallet” for a particular client, qualitative metrics must also be considered. Does having this client in your stable result in additional business? What other strategic value does the client bring?

In the end, the metrics should be assisting you—and how you define and apply them is the true secret to client profitability. For instance, how do you derive direct costs to be associated with the client? If a partner works on a client matter, how do you allocate for their work effort? Finally, what if you are moving off of strictly billable hours to alternative fee arrangements? The inputs and outputs have not changed, but the methodology used to analyze client profitability must.

Russ Haskin is Director of Business of Law Consulting at Wilson Legal Solutions and former Director of Consulting at LexisNexis Redwood Analytics. Russ has been a trusted advisor to over 200 law firms across the globe ranging from small firms to several within the AmLaw 10. He is a recognized expert in matter management, alternative fee arrangements and profitability consulting.

Russ Haskin is the Director of Consulting at LexisNexis Redwood Analytics. Russ has been a trusted advisor to over 200 law firms across the globe ranging from small firms to several within the AmLaw 10. He is a recognized expert in matter management, alternative fee arrangements and profitability consulting. In addition, his research on legal management topics has been published by multiple journals.

The Lonely Side of Solo Practice
Document Assembly for Real Lawyers 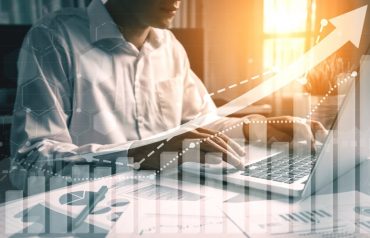 8 Legal Practice Areas Growing in 2022 and Beyond

Michael Rynowecer | Demand is broad and deep for outside counsel. Revelations from BTI's 19th Annual Survey of Top Legal Officers.

Understanding Law Firm Profits — And What to Do With Them October 19, 2022

Millions of Documents, One Source of Truth: NetDocuments Organize September 23, 2022