In the following, I hope to convince deeply professional, widely respected, well-educated, multi-degreed grown-ups to doodle.

Doodling may be the very last activity you’d look to for improving your productivity, uncorking your creative genii and deepening your listening skills. You are already — just three long sentences into this post — rolling your eyes so hard your hat fell off. But stay with me. There’s science. There’s history. There are famous people.

Doodling occupies one part of the mind while another part of the mind does important work. Here’s the part where I link to a paper by a cognitive scientist and an article from the Atlantic and PBS. But you don’t really need scholarship here because once in your life, you were 7 years old. You were armed with a crayon facing a wall in the living room that you subsequently improved with a drawing of a dog and some stars and what historians insist is the sun, but which may also be a yellow balloon with hair.

Doodling, like writing notes by hand, engages the mind in active cognition. This is not the same as simply occupying someone’s time while they fidget with a fidget spinner (which has exactly zilch science backing up every $15 sale). People who doodle during lectures are typically better at recalling cogent parts of the lecture. They’re not distracted, they’re engaged.

So should you doodle on the job when your job involves law and justice and generally being freaky smart?

It might not be a bad idea. The science related to doodling shows that engaging the brain in the generative act of scribbling allows the creative mind to run loose in the background. This is why highly creative people sometimes seem like they’re in la-la land drawing anime on a legal pad and then suddenly bark out the perfect solution to a problem. Just because they don’t look like they’re thinking doesn’t mean they aren’t.

Consider Stanislaw Ulam. A brilliant mathematician, Holocaust escapee and one of the bigger brains on the Manhattan project, Ulam once parked his dazzling dome at a lecture in 1963. Like anyone at a lecture, Ulam found himself bored enough to doodle. Being a math guy, he drew positive numbers in a square spiral. As the lecturer droned on, Ulam marked all the prime numbers appearing in the square and discovered Ulam’s Spiral. This mathematical exercise not only shows the gorgeous spatial relationship of prime numbers, it may have provided a solution for the Goldbach Conjecture, which has been driving mathematicians nuts since 1742.

Doodling in Meetings Is Active Listening

But isn’t doodling just daydreaming on paper? Not according to that 2010 paper published by Jackie Andrade of Plymouth University. Andrade determined that doodling does not distract from the primary task.

Imagine you’re in a meeting about prior art in a patent case. During the brief introduction, your mind wanders into a daydream about surfing, and then you start wondering if you have enough moola in your vacation fund to get to Maui in January and, no, you don’t, but if you sell some stock from the mutual fund and use some miles for the flight … Oh crap! The actual meeting has started and you have no idea what’s under discussion.

Daydreaming is not an idle exercise. It uses enough executive functions that you cannot pay attention to the speaker. Unless you doodle. Doodling doesn’t use a lot of cognitive resources. It uses just enough brain power to keep you from daydreaming — but not so much that you don’t pay attention. It’s a focusing agent.

Andrade’s study had 40 college kids listen to a phone call. Some doodled, some didn’t. Doodlers were able to recall 29 percent more of the call than non-doodlers.

For the purely competitive, if you doodle during a call or in a meeting you might end up nearly 30 percent more informed than your peers.

You Were Promised Famous Doodlers

Some people claim Picasso doodled, but Picasso was Picasso and anything he drew was art. Same with Walt Disney — if he drew Mickey Mouse in the margin of a book it wasn’t a doodle. It was a cartoon.

How Do You Doodle?

You wouldn’t think doodling needed an instruction manual, but what if you’ve been disassociated from your 7-year-old self for so long you’re rusty with the squiggles? Fortunately, there are books like “The Doodle Revolution,” “Doodling for Academics,” and “Doodling in French.” There are also books predating the doodle revolution — by a long shot. “What to Draw and How to Draw It” was published in 1920. It will teach you how to draw squirrels, pastoral scenes, fat rich guys and more by giving you doodle hacks. Check out the image below. From just two squares and some easy outlining one can draw a decent picture of a cat.

Such hacks are important steppingstones for many people who are not talented illustrators. But there’s another benefit: Learning these tricks allows you to draw the same image over and over perfectly. Doing so is a kind of meditation, like drawing a mandala. The drawing focuses your attention. The ritual of drawing the same image from practiced strokes allows you to do this while actively listening. 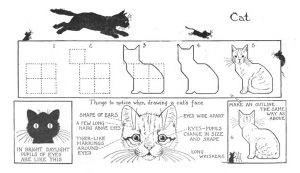 Of course, the resurgence of doodling has reached retail. Not only can you become a certified doodle instructor through Zentangle, you can doodle in style. The Mastermind desk pad from Baron Fig is a luxuriously designed scratch pad with a 12-by-8-inch footprint printed with a dot grid. It takes ink without bleed-through. Below, I used a Palamino 602 and a Pilot Metropolitan to follow the easy instructions in the 1920s manual. In just a few minutes I’d knocked out a passable horse, a terrible dog and an indifferent owl. 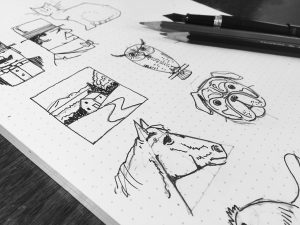 Perhaps the most valuable and intangible benefit of doodling is the simplest. It reduces stress. I could cite Psychology Today to prove it, but come on: How stressed can you be when you’re filling up a page with little drawings of cats?

Do you doodle? Please let us know how it’s helped you on the job in the comments below.

Domo Arigato: How to Prepare for the Coming Robot Apocalypse
Don’t Be Tricked by These False Friends

Analog Attorney | An exhaustive list of the things you need to turn your office into a temple of joyous productivity.