In his much-anticipated ABA book Twitter in One Hour for Lawyers, Jared Correia says the best use of Twitter, and the one most calculated to drive your practice forward, is to engage with others with whom you share similar interests. One of the first steps? Learn how to be a good follower. In this excerpt from the terrific new book, the law practice advisor tells us how.

In life, the advice is most often “Be a leader, not a follower,” but on Twitter that admonition runs counter, at least at the beginning. You have to start out on Twitter as a follower before you can become a leader. Eventually you’re likely to derive followers just by tweeting and being otherwise active, but you’re likely to get off to a better start by reaching out and following others. When you’ve just started tweeting, there’s not much evidence about your niche, aside from your self-description and initial tweets, so you’re likely to get a mixed bag of followers. You can start to define your presence and your preferred kinds of followers when you follow the people best-suited to your interests and agenda. 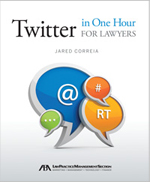 Twitter makes it fairly easy to find other users you might want to follow. When you set up your account, Twitter will aggressively suggest that you start by following your friends and colleagues and even famous people who have no idea who you are and likely want nothing to do with you. Part of the advice is useful, and part is Twitter’s way of showing you how cool it is, in case you didn’t quite believe it.

This mostly benevolent tap on the shoulder to use and engage the service is not uncommon among social media providers; Facebook and LinkedIn do the same kind of thing. When you’re using Twitter’s built-in follower-generation features, just be certain that you are not selecting new followers based solely on Twitter’s contrived, suggested compatibility; if you’re going to connect with someone, make sure there is an actual compatibility that could develop, not just one perceived by Twitter.

Technical and Preferential Rules of Engagement

There are, of course, ways to keep your own counsel with respect to determining whom to follow. Some of these methods track back to offline modes for developing your contact lists, which remain generally effective online. You can start by following your family members and friends if they have accounts; engaging family and friends is a great way to build initial goodwill and momentum, because (generally) your family and friends love you, want to see you succeed, and will spread the word for you about your awesomeness. Next, move on to your colleagues, some of whom will be potential referral sources and some of whom will help add dimensions to your professional development; these folks represent more low-hanging fruit: people you know already and have a comfort level with, often offline.

But eventually, you must move away from your comfort zone and start to engage people whom you don’t know. They may be people with whom you’ll develop relationships through Twitter that could—but don’t have to—move offline. The people to consider trying to engage are:

Where do you find the right people to follow, then? Twitter search is the means to your end. There is a search box at the top right of every page you’ll visit on Twitter. Through Twitter’s internal search engine, you can discover recent tweets (continually updating, as you remain on the results page) with the search terms you apply. In shorter tabs on the left-hand side of the screen, you’ll also discover people who tweet on the subject as well as top videos and top images for your search, the latter two of which are of less use to you in your search for followers.

As you continue to use Twitter, you’ll likely add followers organically as you engage with new people. Then Twitter search will become almost exclusively a way for you to cull information on topics you’re interested in rather than a way for you to find new people to follow.

It’s tempting to think that if you have lots of followers you’re doing it right, but that may not necessarily be the case. Raw follower numbers without regard to the actual followers and their interests and expertise doesn’t say a whole lot about your effective reach on Twitter. Having “effective reach” means gaining access to those people whose information you actually want and to whom you wish to broadcast your own topical information. (The assumption here is that most users you follow will follow you back, which is probably still true.)

While Twitter has attempted to put some protections in place to reduce the number of spammers and bots using the service (and, thereby, to increase the percentage of real people using the service), there are still a significant number of accounts that do not represent the real tweets of real people but that are, essentially, automated, localized commercials. In addition to these purely commercial accounts, there are those users who are selling all manner of devotional philosophies and get-rich-quick schemes: work from home, buy penny stocks, make money in affiliate marketing, and so on. While you’ll likely find it difficult to prune away all of these folks from your follower lists (and it’s not the end of the world if you don’t), you should follow as many real people who are offering you as much useful information in your niche as possible.

When You’re First Engaging People, Be Wary of Over-Following

Don’t follow several hundred people just to get a foothold on the service and then follow back everyone who follows you going forward. Indiscriminate following, while not an evil in itself, will cause problems as you gain followers and keep following all those who follow you.

Espouse a “quality over quantity” philosophy when deciding whom to follow. Ideally, you’re looking at following and being followed by those users who share your interests, which can represent a wide net on its own. But you certainly have other interests outside of your practice. If you’re a car guy, follow and be followed by other car guys, similarly if you like to antique.

With the vast numbers of users on Twitter, nearly every interest is represented, so follow what you’re into and regulate the streams using lists. The trick is to have a robust but not unwieldy number of people you follow.

Some users will say that the character of those you follow reflects on your judgment, and that by following someone, you’re endorsing who they are and what they do—or, at least, that you’re endorsing that what they tweet about represents quality matter. I find the prior assumption to be rather ridiculous; given the vagaries attendant upon the human condition, no one could ever truly vouch for anyone else, because people are changeable and secretive by nature. The supposition that a follow is an endorsement of someone’s tweets is probably nearer to the truth, but not always. At base, a follow probably most nearly means that the follower has found the followee’s tweets to be interesting enough to follow, and nothing more.

Keep in mind that a follow can be revoked at any time, so it’s really not much of an endorsement at all. Those who view follows as de facto endorsements are more likely to keep slim the number of people they follow, while those who view follows as merely the turning on of various pipelines of information (like twisting a faucet that can also be turned off) are more likely to have bigger following lists and a more varied group of people representing various disciplines. The former user is more likely to view Twitter as a business development engine, and the latter user is more likely to view Twitter as an information aggregator.

Jared Correia is Senior Law Practice Advisor at the Massachusetts Law Office Management Assistance Program. Prior to joining LOMAP, he was the Publications Attorney for the Massachusetts Bar Association. Before that, he worked as a private practice lawyer.

Thanks to the ABA Law Practice Management Section for providing this excerpt from Twitter in One Hour for Lawyers—a guaranteed entertaining and useful read.  The books is available from the ABA and on iTunes. —The Editors

Reprinted with permission from the American Bar Association Law Practice Management Section. Excerpted from the book Twitter in One Hour for Lawyers, copyright 2012.

Talk Back to Bad Reviews
No Trick! Take a Treat for Your Tablet