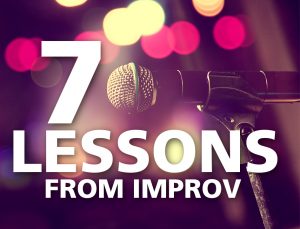 Good improv comics have an ability to walk onto a stage and connect with an audience effortlessly. It may seem like this is because of their innate acting talent, but that’s only part of it. Improv comedy training gives these actors a toolbox of learned skills that allow them to bring their talent to life on stage. These same skills work just as well on the business stage as they do in a theater.

Many businesses have turned to improv comedy schools like Chicago’s Second City to learn the applicable business skills one gets from making people laugh. That might be why the University of Chicago’s Booth School of Business has partnered with Second City Works to study how improvisational skills can improve business decision-making.

Practice in Being Unpracticed

Heather Caruso, Adjunct Associate Professor of Behavioral Science and Executive Director of Booth’s Center for Decision Research, developed the school’s interest in improvisation after conversations with Second City’s Executive Director of Insights and Applied Improvisation, Kelly Leonard. They saw a strong correlation between the skills developed in the unpredictable situations of improv and unpredictable situations in business.

“One of my favorite ways of describing what we’re doing is giving people practice in being unpracticed,” says Caruso. “You can’t script all of life, as much as people will want to try; but I think you can get better at managing the anxiety and the uncertainty, at developing the agility to navigate those uncertain situations so that being unpracticed is not this terrifying prospect anymore. It’s now something that you can do with skill.”

How the Pillars of Improv Comedy Can Improve Your Practice

According to Second City Works, these are the seven pillars of good improv and how each might be applied in the business world:

1. Yes, and … The foundation of the improvisational mindset is the idea of always saying yes to an idea and then building from it. Organizations that adopt a yes culture are more inventive, quicker to solve problems, and more likely to have engaged employees.

2. Listening. Listening is the most important tool of improv. Actively listening to the people acting in a sketch means you’re engaged and ready to contribute — or keep quiet. According to Second City, “Listening is a muscle — it needs to be worked to see improvement.”

3. Client “ensemble.” Not a team. A team implies it is part of a competition, where an ensemble is more like a game designed so all the players win. As Second City describes it, an ensemble is a thing unto itself, or “an entity that is only its true self when all its members are performing as one.”

4. Co-creation. In improv, this means the ensemble on stage and the audience work together to build a hilarious sketch. In the legal profession, it can mean maintaining an open dialogue with clients to build value or collaborating to develop innovative services or products.

5. Authenticity. When a sketch is bombing and an actor turns to the audience and says, “This isn’t working,” then zooms off in another direction, that’s authenticity. Allowing people to vent their frustration and tell the truth about what is or isn’t working allows leaders and managers to learn and grow.

6. Failure. More than anything, improv embraces failure. Working with an ensemble and throwing out sketch ideas and improvisations that bomb makes an ensemble member a better comic and a better actor. By accepting failure as a natural part of the process, organizations can develop a culture that frees people from the fear of failure, improving morale and opening the door to innovation.

7. Follow the follower. Possibly one of the hardest lessons of improv, this pillar flies in the face of hierarchy by making certain everyone in an ensemble takes a turn both following and leading. Although the exercise, in practice, can devolve into silliness and laughter, the principle underlying this technique is so important Tom Yorton, former CEO of Second City, describes it in a video for the American Management Association.

(Adapted from a handout by Second City Works.)

Proofreading and Mindfulness: Bringing a Nonjudgmental Observer to Your Copy
How Learning Improv Gives Lawyers an Edge

Mark C. Palmer | Q: "Now that I’ve opened the floodgates by giving my cell number to clients, what ethics pitfalls might come from texting clients?"

Six Tips for Being a More Persuasive Lawyer October 25, 2021

SmokeBall Product Review No Smoke and Mirrors: Smokeball Is an Impressive Toolbox for Law Firm Management