The Death of Capitalization

It started with the iPod, the iPad and the iPhone. Capital letters appeared in places they never appeared before. Grammar rules call for capitalizing proper names, but now the correct reference to some brands calls for capitalizing in the middle instead of at the beginning. Some people stopped capitalizing “I” because, well, that became the norm.

After years of admonition, people have come to accept that, besides being ungrammatical, using all capitals in emails or texts is the equivalent of shouting. Now we have the opposite problem. People send messages all in lowercase. In part, this arises from our use of smartphones rather than keyboards. We used to joke that we “talked” to another lawyer by using all our fingers to mimic typing on an invisible keyboard. Now we mime electronic communication by wiggling thumbs over an imaginary smartphone. People often brag about how fast they can thumb, but seldom brag about accuracy.

tHE result is often a MISHmash of UppercASe and lOwercase letters. Autocorrect unscrambles some of the mess, but not always the uppercase/lowercase issue. Autocorrect can be helpful, but too often it produces messages with embarrassing mistakes while bypassing style faux pas.

The capitalization confusion also arises from the inability to easily underline, bold or italicize smartphone messages. The fallback to show emphasis may be an exclamation point (tacky!) or FULL CAPITALIZATION. 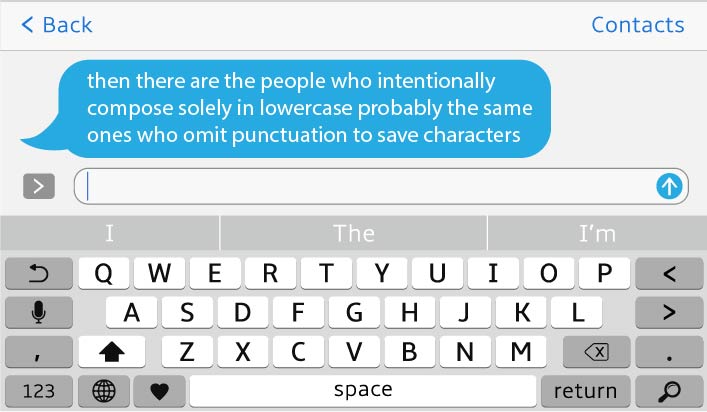 And don’t even consider using an emoji in your professional communications. A recent study showed that even trying to convey tone with a simple smiley-face undermines the sender’s credibility.

Today’s law practice calls for quick response. But being on the go is not an excuse for sloppy communication. You are still judged on the effectiveness and eloquence of your messages.

If you must show emphasis, one solution may be to carry a portable keyboard for your phone which allows more options. However, particularly in pleadings and mediation briefs, no matter how passionate the prose, rather than use bold, italics, or underlining, advocates are better served by using a rich vocabulary to convey precise meaning. A thesaurus can help you employ the exact word to make your point. Ultimately, it is up to the individual lawyer to use care in composing and proofreading before tapping Send.

Vanity about the high quality of your writing is good — so long as you maintain that level of excellence whether you are negotiating a deal via email or sending a text in response to a client question.

If our profession can resist degradation of the quality of legal writing, perhaps proper capitalization is like Mark Twain in 1897: the reports of its death are greatly exaggerated.