Sticking with Evernote: Post-its and Paper, Oh My!

Evernote was designed, as its tagline touts, to help you “remember everything.” In moving you toward that goal, Evernote’s biggest asset is its agility — its ability to do whatever you want it to do for you. For the “Evernote 1L,” however, this can be overwhelming. Why?

There’s not much structure within Evernote — it is made up of Notes, Notebooks and Tags. That’s it. When you first launch the program, it’s much like a painter’s blank canvas, waiting for you to create. Some people, though, are more comfortable with programs that dictate what they should do. In Microsoft Outlook, for instance, everything is compartmentalized into specific buckets — email, calendar, tasks, notes and contacts — and each specific action has been coded so that you don’t really have to “think” about what to do next. In many ways, we’re conditioned to think (or not think) this way about all types of programs we use.

But Evernote’s blasphemous simplicity and agility provide an incredible amount of power to improve your practice’s productivity. “Note Links,” for example, serve to “connect” your Evernote notes to each other through an internal Evernote hyperlink. There are endless possibilities, such as creating “master notes” for projects. Here are two more Evernote features that work very well for lawyers, too.

Show me a lawyer’s desk anywhere in the country and I’ll show you sticky notes on her desk and computer monitor! You may be smirking because you know you have them there, too. Well, did you know Evernote has partnered with Post-It to help you become more productive? That’s right. 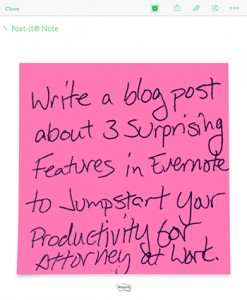 What is it? You can now open Evernote on your iPhone or iPad and take a photo of  a Post-it note you’ve jotted on. (The Android version is in beta and works great; public release is coming very soon.) The difference between using any old camera phone and the Evernote Post-it camera function is that Evernote will instantly recognize Post-its and automatically crop out anything else in the photo. And here’s the big part: It recognizes the color of your Post-It note. Note: Make sure to use the Evernote designed Post-its, with the Evernote stripe.

Why is this so important? Because you can now use color to classify what you need to do or remember. There are many ways to “categorize” Post-its within Evernote — Home, Office, Errands and Family, or Calls, Emails, Research and Delegate, for example. It’s completely up to you, but I can tell you that Post-It notes have never looked as beautiful as they do in my Evernote account. Plus, if you write neatly enough, Evernote’s built-in text recognition feature will allow you to search those handwritten notes.

How do you do this? Tap on your name in Evernote on your smartphone to bring up the Account page. Scroll down to Camera Settings and select “Post-it Notes.” You will see four color choices: Electric Yellow, Neon Pink, Electric Blue and Limeade. If you tap on any one of these, you can assign the specific notebook Post-its of that color should be filed in, add a specific tag and (here’s the part I really enjoy) choose to assign a reminder. If you haven’t used the new Reminder feature in Evernote, you’ll want to click here to learn more. It will absolutely help you remember more and get things done more effectively.

Another very well-used “tool” for any lawyer is some sort of paper notebook. Most lawyers I know (including myself) still like to handwrite notes, deposition questions or even their list of action items for the day. Evernote’s strategic partnership with the Moleskine notebook company was a welcome addition, and you can use the notebook feature in both iOS and the Android OS.

What is it? The pages of Evernote Moleskin notebooks have lines designed to give the Evernote Page Camera the correct perspective and contrast between the ink and the lines. Plus, “Smart Stickers” that you can place on each page come with the notebooks. The Evernote camera reads the stickers and automatically sends the digital version of your notebook page to the right place in Evernote. Yes, physical stickers of an object (home, office, airplane, checkmark, lightning bolt, an x) are all understood by Evernote, similar to the way it works with Post-it Notes!

Why is it so important? Being able to integrate your analog and digital worlds can provide a huge boost to your productivity. Knowing that you can jot down a note in your Moleskin notebook, snap a quick photo, and then act on what you have later in Evernote brings these two worlds together beautifully. Once you’re in Evernote, you can share your note with your team, create action items from it, or add it to an existing project or case notebook.

How do you do this? You need to buy one of the notebooks online or at an Apple store, but otherwise there’s nothing special you need to do. If you want to take advantage of the Smart Stickers, though, head over to the account settings — the same place you set up Post-it notes — and look for “Moleskine Notebook.”

Daniel Gold is a productivity author, podcaster, keynote speaker and consultant. He is the moderator of the GTD Virtual Study Group podcast, co-host of The Productive Life Show podcast, author of Evernote: The Unofficial Guide to Capturing Everything and Getting Things Done and Official Springpad eBook. You can read Daniel’s posts on the official DEG Consulting website, or join him on Facebook, Google+ and Twitter.