You Will Be Bullied — Be Prepared!

Bullying lawyers, it’s inevitable, says Jay Harrington, that as a new associate you will be bullied. Here’s how to prepare for overt and stealth attacks.

It’s probably a good thing that it happened to me right away. About two weeks into my legal career, I had my first encounter with a bully lawyer.

I was working at the Chicago office of a large New York firm. My first day was Monday, September 17, 2001. After the attacks on 9/11, most new associates — myself included — were placed in the corporate bankruptcy department due to the spike in work, regardless of our prior plans or preferences. (I was supposed to be in the M&A group.)

Things were crazy. Not only was I crushed with work, I was still trying to find my way around the office, let alone the Bankruptcy Code. My head was spinning. Nonetheless, I started to get into the swing of things after a couple of weeks. Or so I thought.

It Was Just a Routine Motion

One of the first matters I worked on involved drafting a relatively routine bankruptcy motion to reject a contract for a corporate debtor. After filing and serving the motion, I received a call from counsel to the counterparty to the contract. He immediately lit into me, accusing me of filing a frivolous motion, threatening sanctions, and questioning my qualifications — that’s the G-rated version.

Whoa. I was shaken up. This guy was pretty seasoned, at least in terms of years of experience. At the end of the conversation, I was convinced I had really messed up, and that my legal career was pretty much over. 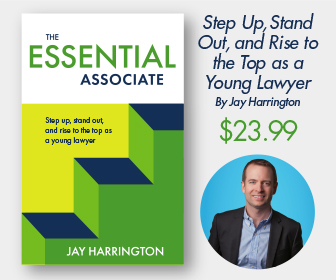 Available in the Attorney at Work Bookstore

But after gathering myself, I put the incident in perspective and saw it for what it was: an attempt to gain an advantage by scaring the crap out of a newbie lawyer. After talking to one of the partners on the case, I settled down and things ended up fine. We won the motion.

How to Prepare for the Inevitable Bully Encounter

If you are a junior lawyer, there are a few things you can do to prepare for your first encounter with a bully.

Accept that it will happen — it’s inevitable. This will at least allow you to be prepared. When you deal with a bully, maintain your composure and professionalism, and don’t take the bait. If it’s a litigation-related matter, accept that the dispute at issue will more than likely need to be resolved in court, so be prepared with the facts and the law. Distinguish yourself as the clear-eyed, reasonable and composed advocate.

Be professional but not a pushover. Don’t shrink from the encounter and be intimidated. It’s okay to punch back. Just like in the schoolyard, if you stand your ground, your bully-adversary may simply shrink away, realizing that his tactics won’t work on you.

Seek advice. Everyone’s been through it, so talk to an experienced lawyer in your firm. You may be convinced after speaking to the bully — like I was — that you screwed something up. But odds are you didn’t. And even if you did, it’s better to deal with it right away. Most mistakes can be resolved if they’re caught early enough.

Desperate Adversaries Can Do Desperate Things

Fast-forward six months from my 2001 incident. I’m hitting my stride — no bully lawyer was going to push me around again! That’s when I encountered a more cunning, stealthy foe.

Six months in is when many new associates get their feet underneath them. They’ve learned how things operate a bit, have generated a fair amount of work product, and start to get some individual responsibility. In my case, I was inheriting roles from more-senior lawyers who were transitioning from the case I was working on to other matters.

One of the roles involved resolving claim objections (hundreds of them), which required lots of phone conversations and correspondence with opposing counsel. One call was from a partner at a large law firm in my hometown of Detroit, who called to inquire about the “status” of his client’s claim, and our claim reconciliation process in general. Trying to be helpful and courteous to a fellow Michigander, I explained the claim process and promised to look into his client’s claim and give him a callback.

A couple of days later I got another call from him. I remember thinking it was a bit odd that he called back so quickly — things were busy and I hadn’t yet looked into the status of this particular claim — but I apologized for not getting back to him and promised to call him back later that day. Then I looked up the claim and learned we had objected to it, and it had been disallowed — two months earlier.

I called back and broke the news to the guy — his client’s claim was disallowed and thus not entitled to a recovery in my client’s bankruptcy. He starting asking me a litany of questions: Why didn’t he get served with the claim objection? Why didn’t I tell him this in our initial conversation? What should he do now? Is there any way to fix this?

I felt bad for the guy. I answered his questions and tried to be helpful. I explained that if he wanted, he could file a motion with the Bankruptcy Court asking for relief.

Based on our records, he had been served with a copy of the objection, but I didn’t see any harm in letting him know that other similarly situated creditors had sought this relief under similar circumstances. It never really occurred to me why I needed to explain this to a bankruptcy lawyer with 25 years more experience than me.

Two weeks later he filed a motion seeking relief. The motion and accompanying affidavit was peppered with my name and summaries of our conversations, as well as email correspondence between us. The motion asserted he had never received a copy of the objection, and implied strongly that I had consented to the relief his client was seeking.

I was naive and didn’t see our correspondence for what it was: groundwork for him to try to wriggle out of a jam. It’s tough to claim a conspiracy to your superiors and your client without coming across as weak. The situation got resolved, but I learned a valuable lesson along the way. Never let your guard down. When backed into a corner, adversaries can do desperate things.

So what should a junior lawyer take away from this situation?

Be extremely careful in your conversations and correspondence.

Assume every word you speak or write will find its way into the court record. Protect your client, and yourself, at all times. Again, be courteous, but leave it up to your adversary to figure out the manner in which he or she should proceed. It’s no fun to see your name in a pleading filed by an adverse party.

Most of the lawyers you’ll deal with on the other side will be great. They’ll try to gain whatever advantage they can over you but will do so in an honest, courteous, and respectful manner — knowing that it’s generally futile to act in an unprofessional manner.

But there are adversaries who will try to take advantage of you. Be aware, but don’t be jaded — it happens to everyone.

Time to Leave Law Behind? Then What?
Word Styles: Automating a Table of Contents