As you will no doubt have heard by now, the latest Clio Legal Trends Report was released in October. (You can download it here.) I spent so much time studying it, I’ve only now digested enough of it to produce a coherent review. That, or I’ve been comatose for the past three months due to a muffuletta sandwich Legal Talk Network’s Laurence Colletti force-fed me while we were at New Orleans’ Central Grocery.

Be that as it may, the Clio Legal Trends Report is an annual publication that gathers aggregated and anonymized data from tens of thousands of legal professionals (mostly Clio users, but some others too) to draw conclusions about legal industry trends. First conducted in 2016, it’s part study, part aspirational call to action.

In the wave of reviews that came out immediately after the report’s release, everyone focused on the fact that the net promoter score (NPS) for law firms is about on par with that of airlines. What does that mean? Just to clue you in, as I write this, I am about to board a second plane after my first plane broke for a return flight to Boston. All told, I’m looking at a three-hour delay. This is after my flight out was delayed over an hour. Thus, when I tell you that the average lawyer’s NPS score is on par with that of JetBlue’s — well, it means that NPS score sucks pretty damn hard.

News flash, everyone: LAWYERS ARE NOT GOOD AT CUSTOMER SERVICE. So, let’s buck the trend and talk about some other things the report revealed.

What’s Not Different in the Clio Trends Report

Lawyers’ utilization rates, realization rates and collection rates are still poor, and about on par with what they were three years ago — Clio collects these metrics every year. (Sad trombone.) 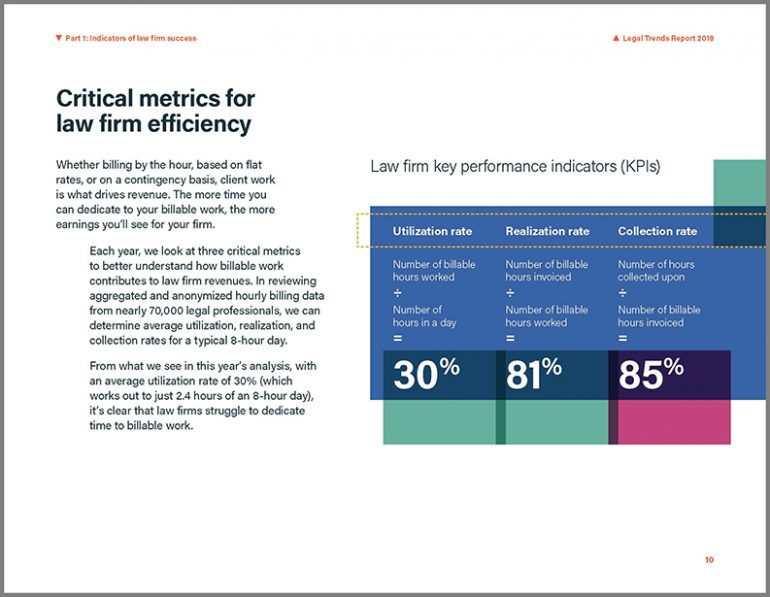 A lot of stuff, actually — that’s why the “What’s Not Different” part was so short.

I was pleasantly surprised by all the novel and useful information in the new edition of the report, as well as all the extrapolation that I could draw from that information.

The average hours per day spent on administrative tasks by lawyers and their staff are way too close. This clearly indicates that lawyers are not effectively delegating their work, and so they aren’t practicing at the top of their law licenses. The most efficient law firms I’ve come across devolve as much high-level substantive work as possible to lawyers, and as much low-level substantive work and administrative work as possible to staff. So, to recap: Lawyers continue to have trouble managing their businesses. 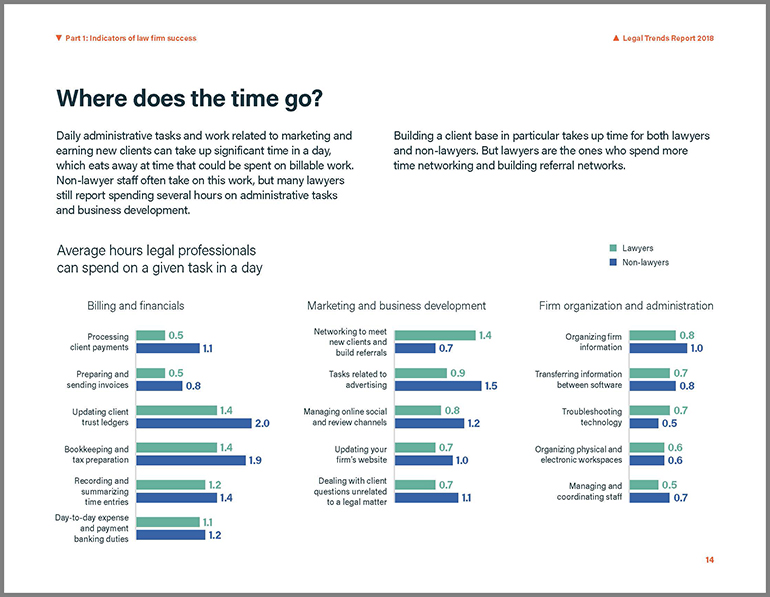 Lawyers spend a lot of time working outside of office hours because they are tending to other obligations during the day. That sounds bad but it isn’t necessarily bad. It could mean that solo and small firm lawyers are more often than not creating lifestyle practices (rather than just trying to generate as much revenue as they can) — and are perhaps prioritizing their families? (audible gasp)

Even absent a discussion of net promoter score (remember, I said I wouldn’t talk about that), the report has a truckload of useful information about how lawyers and consumers continue to misunderstand each other, mostly located in parts two and four of the report, and as follows.

My last column was about how lawyers are adjusting their rates downward, and simultaneously flattening costs for their clients, due to market factors. The Clio Legal Trends Report backs up the assertion that the most important factor in setting pricing is client pressure. Furthermore, the report indicates that the second most common reason law firms discount services is … client pressure.

Perhaps not surprisingly, the main reason consumers avoid lawyers is that pricing is unclear and uncapped — the final cost is uncertain.

The report also cites two major reasons lawyers are willing to discount rates: empathy for the client and concern over the client’s ability to pay.

But I think this is another instance where lawyers and legal consumers are like two ships passing in the night. Lawyers want to believe they are offering discounts because they are being empathic. The real reason, though, is their clients have evinced an inability (or unwillingness) to pay, which the magnanimous attorney is then able to work around. In the final analysis, the endgame is still that consumers avoid lawyers because lawyers are too expensive. Lawyers may (even subconsciously) mask that in terms of sympathy, or higher motivations, but it is and remains mostly a question of money.

This next graph from the report creates something of a reverse funnel for law firm marketing. Looking at it the way it’s presented, it’s a top-to-bottom list of legal problems consumers try to solve for themselves. Flip it, and it’s a guide to practice areas that consumers view as too complex to attempt resolving on their own, without a lawyer. I guess that’s the glass half-full version, especially if you’re in the market for a new, high-volume practice area. 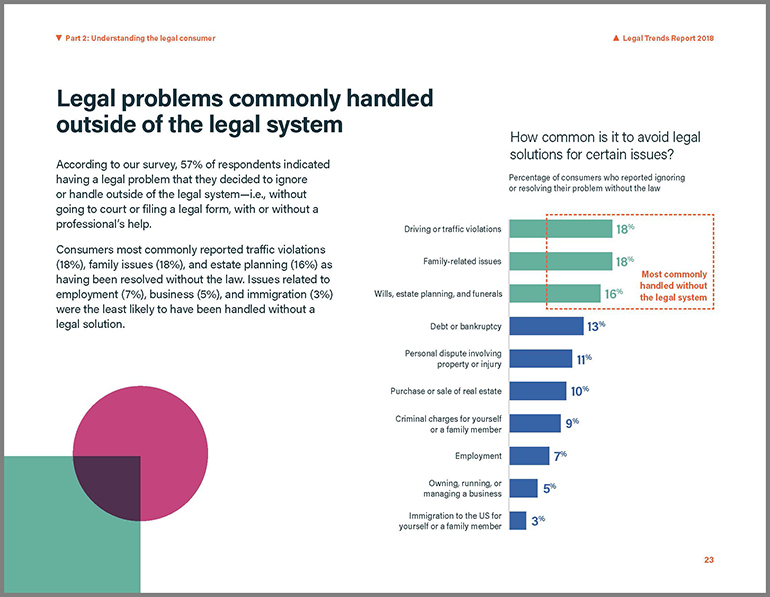 New to the 2018 report is data on what consumers think about before and after hiring a lawyer. According to the survey results, the thrust of the major motivations for hiring an attorney is that there is a problem the consumer believes only a lawyer can solve. Beyond that, lesser considerations relate back to the cost of the representation. That confirms a lot of what we know about law firm marketing and lead conversion. Consumers are buying legal services because there is a significant pain point. Once they decide that a particular lawyer can assuage that particular pain, the next consideration is price.

It stands to reason that a law firm that can ruthlessly market to the major pain points of its client base, while keeping upfront costs low and continuing costs flat, is a peak modern law firm.

Of course, the report has a graph further representing the disconnect between lawyers and clients, underscoring the best way to screw this up. 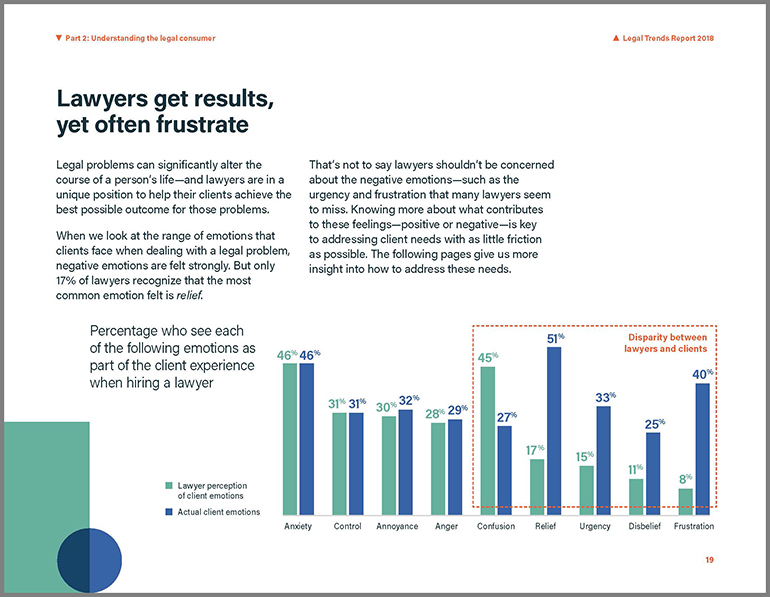 When your clients come to you, they generally have a serious need, one they often view as urgent. They’re confused and need someone to guide them through the legal process. If you can’t provide them with an effective understanding of their situation and relieve their angst and urgency, then that client will get frustrated (with you). That is really how the attorney-client relationship falls apart: Urgency + Confusion = Frustration.

Turn confusion into clarity, and that converts frustration to understanding and acceptance.  Oh, and your clients will love you, too. And you’ll get paid, ultimately more. Because people pay for resolutions to what they view as emergencies.

I Saved the Best for Last

Probably the most shocking thing in the 2018 Clio Legal Trends Report is the staggering numbers at which law firm clients prefer in-person communication — for pretty much every potential law firm transaction except payment processing. Which begs the question: What have I been doing with my life?

At this point, I suppose I owe an apology to every Luddite lawyer I’ve ever made fun of. Clients do want you to work 18 hours a day and don’t want you to use technology. Even the millennials! I’ll be damned.

Wait. Lest I lead you too far down the garden path of the fever dream of lawyers and clients united in a shared hatred of modern technology, consider one sneaky little factoid that also makes its way into the report.

Of all the people who want to hire lawyers but don’t, those people think that: 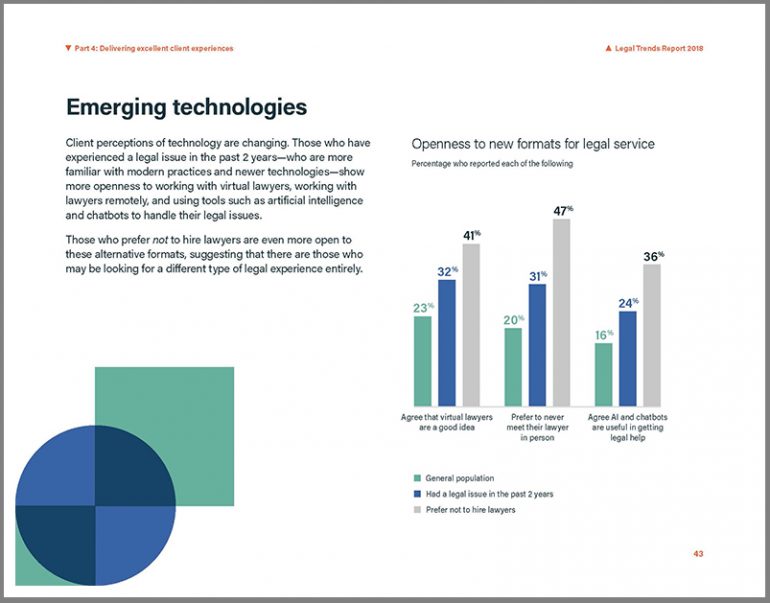 And so, this simple page of the 2018 Clio Legal Trends Report is just like the burp belched by that low-down turtle named Mack under the Yertle stack. It’s maybe the most important and effectual snippet of data in the entire document: That the people who don’t hire lawyers now avoid them because lawyers don’t use modern technology.

And now for the million-dollar question:

What Kind of Law Should You Practice?

So, here’s my annual assessment of the kind of practice you should start — if you started a law firm today.

Not any law in Iowa — still. (According to the report, average rates are lower than rates adjusted for actual purchasing power!) 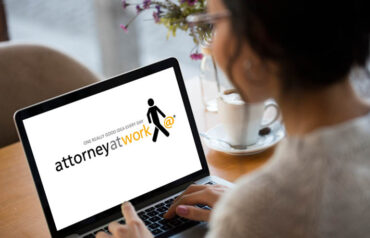