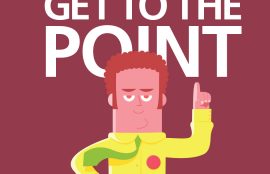 Sanctions. That word has always troubled me. It’s a contronym, a word that has opposite meanings. Lawyers know that a motion for sanctions asks the court to penalize an adversary’s bad act. But other English speakers define a sanction as a ...

Why Superlatives May Not Be So Super

Get to the Point has previously preached that specificity enhances credibility. In fact, I’m working on a cross-stitch with this aphorism to place on the office wall. Using an unsupported superlative flouts this rule.

Qualifiers Do Not Increase Quality

You can’t be persuasive if your message is confusing. Whether you’re arguing a motion or giving an interview on a political issue, clarity is what counts. A qualifier changes the meaning of another word or phrase. Too many qualifiers convolute ...

You Can’t Practice Law Without Math

A big part of a lawyer’s role is negotiation, and that means numbers. A lawyer has to be able to calculate the value of whatever is being negotiated. Case evaluation is part art and a lot of math. Pulling a number out of the air and hoping the ...

A television commercial for Butterfinger candy bars brags that they are “crispety.” Another advertisement claims they are “crunchety.” These descriptions are not words, and Nestle should not be trying to persuade us otherwise. One would think ...

When your brain knows just the right word, you can be more concise. And sometimes you can slip in the verbal dagger without the victim understanding what you’ve done.

About Your Love Affair with the Hyphen

Some writers feel compelled to insert extra hyphens. Often they do it when they think they spot an adverb. Sometimes the offending word isn’t even functioning as an adverb; it’s part of a compound verb. Either way, put away the hyphen and step ...

Attorneys frequently ignore this basic journalism rule: Start with your strongest point. Your lead or “lede” should entice the reader to continue reading. The phrase “bury the lede” appears to be the only use of this alternate spelling. Perhaps ...

To Comma, Or Not to Comma: You May Be Getting It Wrong

Comma placement can cause a big effect in legal documents. (See "What Broadway's Hamilton Teaches About Legal Interpretation.") In ...

Comma placement matters. Broadway musical Hamilton’s Angelica Schuyler sings in “Take a Break”: In a letter I received from you two weeks ago I noticed a comma in the middle of a phrase It changed the meaning. Did you intend this? One ...