With, Not Who, for Things; Who, Not That, for People

The general grammar rule is to use “who” to refer to people and “which” to refer to inanimate objects. The possessive form of “who” is “whose” but there is no possessive form for “which.” The result is that writers must choose between a convoluted sentence structure and incorrect grammar.

The Message Recipient Hears a Who

We all know what you mean when you use “who” to refer to a thing instead of a person, but this construct still strikes a jarring note.

“The historic hotel, whose interior was designed by Gulla Jonsdottir, has been a sweet party backdrop”

a grammarphile would have written

“The historic hotel, the interior of which was designed by Gulla Jonsdottir, has been a sweet party backdrop.”

“The historic hotel with an interior designed by Gulla Jonsdottir has been a sweet party backdrop.”

“The companies whose employees are happiest enjoy the greatest profits”

could have been written

“The companies, the employees of which are happiest, enjoy the greatest profits.”

But isn’t the writing better by avoiding the issue?

“The companies with the happiest employees enjoy the greatest profits.”

When you see yourself getting ready to anthropomorphize an object by calling it a “who” instead of a “which,” look for ways to rewrite the sentence to avoid this awkward construction. Using “with” is usually the easiest way to resolve the problem.

On the other hand, communications about people that refer to them as if they were inanimate objects could make you wonder if a robot was putting words together.

You may have seen this ad:  Wanted: Grandparents That Want to Hear Their Grandchildren

The desired customers are people who want to hear their grandchildren.

Similarly, a pundit ungrammatically described a political reversal as “a humiliating loss for a man that rarely loses.”

Use “who” to refer to people, and try rewriting sentences to use “with” when discussing an inanimate object. As for the “that versus which” rule, we leave that for another day. 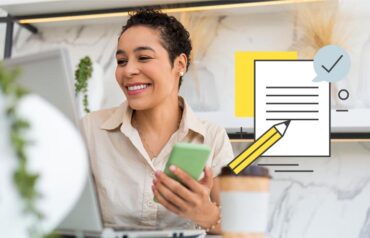 How to Use Section Breaks to Change Margins, Page Orientation and More in the Middle of a Word Document

Page breaks have their uses, but only section breaks let you change section formatting part way through your Word doc.