Sadly, there’s one feature in my Android smartphone’s powerful interface that I don’t take full advantage of: its built-in native speech-to-text recognition feature, which is really quite good. But Android also offers several standard dictation apps, for “old school” folks.

Dictadroid ($1.99) is my favorite voice-recording app for Android. As I explained in my original post here on Android apps for note-taking and dictation, Dictadroid has an easy-to-use interface that allows you to pause, forward, skip back and save digital recordings. Another power-packed feature is the ability to insert speech where you missed some the first time without recording over the original portion.

I also love the fact that you can record for an unlimited number of minutes (or the maximum amount your SD card will hold).

If you want a no-frills recorder, though, look no further than Easy Voice Recorder (which has a free version, as well as a Pro version for $3.99). This is another easy-to-use app that offers audio recordings with the ability to send them in .wav or .mp3 format via email or Dropbox, or to store them on an SD card. It’s not as robust as Dictadroid, but it’ll record what you need in a pinch.

If you want to spend more on the back end, you might want Winscribe. It functions much like Dictadroid but adds a few more features. For a full review and comparison of Dictadroid and Winscribe, check out my post. The Winscribe app is fully functioning, allowing you to tag information, snap pictures and take notes. I’d compare this to Evernote, in providing a self-contained notation and dictation system. I love the app, but it’s a little (maybe a lot) cost-prohibitive for run-of-the-mill users like myself. However, I can definitely see some attorneys, especially those on the litigation side, breaking for this app and its features.

Android has a great built-in transcription service. However, I’m still waiting for Nuance to release a Dragon NaturallySpeaking (DNS) app that will allow speech-to-text transcription like my desktop system does. That doesn’t stop me from using my Android phone in combination with Dragon on my desktop, though, since I can import recordings from my mobile device for transcription.

To make my Android phone and desktop DNS program talk, I simply set up an alternate profile in Dragon on my desktop, train Dragon using a Dictadroid recording, and then import the file into DNS. For a step-by-step how-to, you might check out this paper. The specifics will vary based on the version of your DNS software, of course, so be sure to read the appropriate instructions. I would say that my new DNS profile has about 75 to 80 percent accuracy, which still beats having to type out the dictation.

Dictation import is one thing I know I can use more effectively, though, and for starters, I’d like to turn over a lot of the “desk work” to my legal assistant. Rather than importing and transcribing each file, I plan to set up DNS on another system to allow a freestanding import. That will free up even more of my time to tackle other tasks.

Windows 7 has a pretty good speech recognition and transcription program built in, too. If you’d like to try it, check out this paper. I can’t say whether it is even a viable dictation option for you, however, so if you’re in doubt, go with Dragon NaturallySpeaking.

But remember, when using any dictation device, you should be aware of your surroundings to improve the recording and the quality of the input—DNS is finicky about the sampling rate, so test that first before spending hours on a recording.

My 2013 Dictation and Transcription Resolutions

One of my 2013 resolutions is going to be improving the effectiveness of my dictation in the office. Right now, passing dictation assignments to my assistant is a nonexistent process.

To begin, I’m going to dictate short messages, such as, “Draft a letter to John Brown about the John Smith case and depositions.” I can then email the message, and my assistant can prep the letter for my later edits. This may seem like a rather mundane task to “seasoned” or BigLaw attorneys, but for a guy who started out in the firm of “Me, Myself and I,” the process just seemed redundant and worthless before. Now, as the firm grows, I see more use for directing staff and associates through dictated messages.

I’m leaning toward this system over Android’s built-in text-to-speech transcription for two reasons. First, speech-to-text is finicky, and second, speech-to-text has a limited capacity.

As mentioned earlier, accurate speech-to-text depends on prime circumstances with the input speech—and most dictation isn’t done in optimal circumstances. Therefore, your transcriptions suffer, dropping the accuracy rate. Though not perfect, my assistant can cut through the background noise and discern the true text. Also, Android speech transcription tends to fail on longer strings of sentences. Sometimes, if you’re dictating, you may find several paragraphs untranscribed due to the device’s failure. While recording failures can occur with standard dictation, they’re less likely to occur.

But no matter what system you devise, once you have digital dictation in place, you’re going to improve your mobile productivity and free yourself to tackle bigger projects and cases.

Jeff Taylor is the author of The Droid Lawyer, a blog for lawyers using Android devices. You can follow Jeff on Twitter (@jeffrey_taylor) and on Google+.

Can an Online Lawyer Network Bring You Business?
Law School Regrets: Wish I had Made More Friends 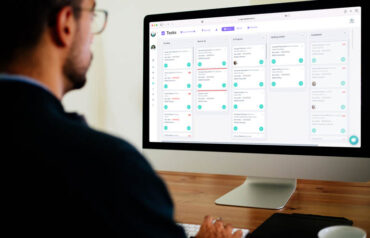