2017 Survey Results: Lawyers’ Use of Social Media for Marketing

Facebook continues to gain fans in the profession, according to Attorney at Work’s 2017 Social Media Marketing Survey, conducted in February. This is the third year we’ve asked lawyers about their social media habits, preferences and attitudes, and 302 responded to this year’s survey. (Click here to download the survey results report.)

How are lawyers using social media in their marketing efforts? Here is what we learned.

What’s the Social Media Story for Lawyers This Year?

Nearly everybody is now using social media: 96 percent of responding lawyers say they do. What’s more, 70 percent of this year’s respondents say it’s actually part of their overall marketing strategy (compare that with 60 percent just two years ago). 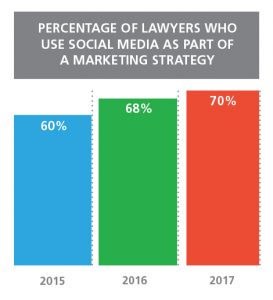 LinkedIn is still No. 1 among lawyers, but it is falling behind a bit — 89 percent reported using it regularly last year compared with 84 percent this year.

As for Snapchat, 4 percent say they use the emerging platform regularly.

What’s used most often? When asked which platform they use most often, Facebook came out on top: 48 percent of the lawyers cited Facebook compared with 27 percent who said they spend more time on LinkedIn. (Perhaps that’s why LinkedIn is making big changes over there.)

But Is It Working?

As for which platforms are most effective for bringing in new business, Facebook again took first place — at 31 percent — with LinkedIn second at 27 percent. “None” was a close third, at 26 percent, and Twitter a distant fourth at only 5 percent.

A little help here? Do lawyers handle all of their social media marketing activities themselves? Most do, according to the survey results: 67 percent do it all, while 23 percent say they get some help, and 10 percent say it is all handled by someone else.

About Solo Practitioners’ Use of Social Media

Solos continue to use LinkedIn first (82 percent) and Facebook second (78 percent), but Twitter is gaining a greater following over past years. Almost 60 percent of solos reported using Twitter — a 14 percent increase over 2016. However, Facebook pulled into first place — at 34 percent compared with 22 percent for LinkedIn — when we asked which platforms are most effective for bringing in new business. Twitter was next, pulling only 3 percent.

Making the Leap to Paid Social and Content-Sharing Tools

Paid social advertising. For the first time, we asked respondents if they are using paid social media advertising to market their firms. Of the 40 percent who said yes, 50 percent regularly use Facebook Ads, the most popular platform for this by far. In contrast, only 8 percent pay for LinkedIn ads and only 4 percent purchase Twitter ads.

Content sharing. We also inquired about content-sharing platforms — websites that help lawyers and law firms distribute articles. We learned that of the 31 percent who reported using a platform beyond their own blog, website or social media accounts, 32 percent are using LinkedIn’s publishing platforms and 26 percent are using Facebook publishing tools, while 9 percent use JD Supra and 7 percent use Medium.

Our 75-page guide delivers great advice from 20+ top legal marketers on how to get your firm’s social media strategy up to speed.

Next-Level Marketing and Business Development for Your Law Practice

What can you do to ramp up the ROI of your marketing activities? Here are links to popular Attorney at Work articles and books:

To Build Your Personal Brand, You Must First Embrace Discomfort
Crafting a Low-Stress Digital Marketing Strategy for Your Small Firm

Teddy Snyder | You can use Wikipedia’s deep market penetration to help market your law practice.

LinkedIn Profile Update: How to Stand Out in 4 Simple, Achievable Steps June 26, 2022