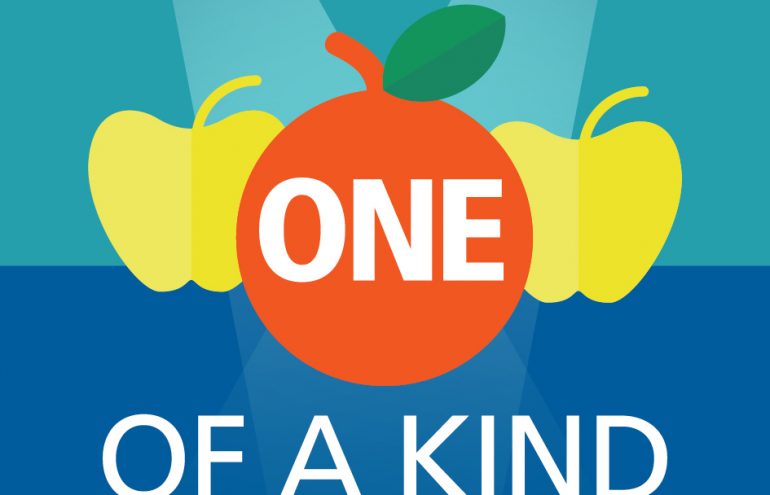 One of a Kind

To Build Your Personal Brand, You Must First Embrace Discomfort

Early in my career, I received contradictory advice about how to grow and advance in a large firm. The first school of thought suggested that I should keep my head down and just focus on becoming a good lawyer. The second said that it was important to start thinking about building a foundation for business development from day one.

I kept my head down. It was the path of least resistance.

After six years, I became a good enough lawyer — competent, reliable, hardworking. It was at that point that I got the entrepreneurial bug and decided to leave and join my wife in her fledgling graphic design business. I was excited about our new adventure together, but I was also scared. I remember staring up at the ceiling the night I put my notice in at the firm, while wondering, “What the hell did I just do?”

I knew very little about the world of marketing and creative services. We had one client. And my job was to develop business.

During my law firm years, I took no initiative to learn how to sell. One time, a great opportunity fell into my lap courtesy of a former colleague who worked in-house at a big auto supplier. But after participating on a conference call with more than 10 partners to discuss topics like conflicts and assigning generation credit, I just gave up. It seemed like an irreconcilable morass. There were too many hands in the honey pot.

However, the truth was that I didn’t really want to put the work into figuring out sales. I was comfortable keeping my head down.

My new entrepreneurial venture was not at all comfortable. We had a bit of money saved, but not much — certainly not enough to keep us going for long without a source of income. However, a funny thing happens when you put yourself into the “discomfort zone.” All of those excuses as to why you can’t or shouldn’t do something melt away. Within 12 months, I managed to develop enough business to support a team of six creative professionals and produce a healthy profit in a relatively low-margin industry.

This happened through an intense focus on building my personal brand and through hustle. I wrote and spoke about professional services marketing. I joined the Legal Marketing Association. I became known locally (and eventually more broadly) as someone who knew this space.

At first, I had to do a lot of traditional selling — cold calls and networking, mostly. But there’s a tipping point, typically after two to three years of concerted effort, where a professional’s brand starts doing the selling all by itself.

Hustle and Intense Focus: A Law Firm Niche from Scratch

Fast forward a few years to 2008 and the financial crisis. The economy was impacting our Detroit-based marketing agency. To hedge against the risk, I decided to start my own small law firm. Again, I was starting from scratch — I had no clients and had not practiced law in more than three years.

But this time I had an advantage. I had just been through the process of learning about the benefits of building a powerful personal brand in the context of our marketing agency. So, when I started my own law firm I took my own medicine. I identified an underserved yet promising industry niche and threw myself into the middle of it. In this case, I focused on part of the automotive supply chain that many others were overlooking: auto dealers.

I reached out to auto dealer lawyers and offered myself as a referral source. I had a skill set in bankruptcy law that most of them did not, and since my practice was small and niche, they were comfortable sending clients my way as they (correctly) perceived no threat that I would try to poach more work. I wrote articles for and spoke to the local auto dealers’ association about the potential impact of a General Motors, Chrysler or Ford bankruptcy. I ended up getting hired by the association (at the recommendation of some of the auto dealer lawyers I came to know), and a whole host of individual dealers hired my firm once GM and Chrysler filed for Chapter 11 protection.

All of this happened within the first few months of opening my new practice. Once again, it all resulted from hustle and an intense, narrow focus on building my personal brand.

I learned a lot that year. The biggest thing was that, when your back is against the wall, you can do remarkable things. I built a strong personal brand in a narrow industry — but only because I threw myself into something new with relative abandon. It was scary, but most things worth doing are.

Building a Personal Brand Requires Dancing with the Fear

Your legal career comes down to a choice between two paths. One feels safe, the other fraught with risk. One requires conformity, the other originality. One leads away from fear, the other straight toward it.

Author and marketing guru Seth Godin attributes the mental and emotional angst we feel when confronted with something new to the “lizard brain” — our prehistoric brain stem that is responsible for revenge, fear and anger. Godin explains that:

“The lizard brain is eternally vigilant, trying to keep people from noticing you (which is dangerous). The lizard brain hates failure, and thus it hates creativity or the launch of anything that might make a fuss (which can lead to failure).”

The lizard brain doesn’t want you to feel vulnerable, to change, or to feel anxiety. It’s vigilant and relentless. It doesn’t take a day off. It’s there every time you step in front of a microphone or sit down at a keyboard. It’s what keeps you from raising your hand at a PTA meeting or expressing your heartfelt opinion in a public setting. It’s what stops many lawyers from taking steps to stand out from the crowd in the legal marketplace.

Author Steven Pressfield refers to the fear we all feel as “the resistance.” The resistance leads us to make decisions based not on what we desire, but rather what we think others desire of us. Pressfield decries this mindset as it robs us of our authentic self: “Our job in this life is not to shape ourselves into some ideal we imagine we ought to be, but to find out who we already are and become it.”

Choose One of Two Paths

The first thing a lawyer who aspires to build a strong personal brand needs to come to grips with is this: To make an impact you need to start caring more about what potential clients think and less about what your colleagues may think. That’s because the pressure to conform in the legal industry is strong.

Those who follow the path toward change are not fearless. In fact, they often feel fear more acutely than those who choose to walk a more well-trod path. But they don’t run from the fear — they dance with it. Fear is not a barrier; it’s what drives them.

Fear stops us from doing so many things, such as finally taking the time to define who we are as a lawyer, what we have to offer, why we do what we do, and what our dreams are. We tell ourselves that we will take action “when the time is right.” But then years pass, and we’re still in the same circumstances within our careers, despite an intense desire for change and growth.

The truth is, the only time that is ever right is right now. Waiting for the fear to go away is a hopeless strategy — it never will. At some point, you have to be more afraid of settling than you are of chasing your dream and failing.

It takes courage to face the fear, to move toward it. But the more you face it, the more it becomes a habit. You learn that taking the plunge is not as scary as you thought, so you leap again. And again. Pretty soon, you can’t help but evolve yourself and your personal brand in new and exciting ways.

Soon, you come to realize that fear is not to be avoided, but to be embraced. You see and feel the progress you’re making in building your personal brand, not despite the fear, but because of it. You grab fear by the throat and never let go. Instead of avoiding speaking and networking opportunities, you seek them out. The trepidation you used to feel about picking up the phone and calling a potential client turns into a sense of excitement.

In this sense, fear is contagious because it breeds courage. And, in an industry with so much homogeneity, it feels good to be courageous. Just as the extreme athlete seeks the edge, so too does the innovator, the artist, and the lawyer who carves his or her own path.

It’s easy to succumb to fear — to the lizard brain — and simply keep your head down, telling yourself that you’ll chase that dream later when the time is right. But it will never be the right time. You will never have the right idea. No matter how diligently you seek it, you will never have reassurance.

Ours is a world of limited resources — the most finite of which is time. And time is not on your side, particularly as a busy lawyer. That’s why it’s critical to figure out your goals and start acting toward them, no matter how scary the journey.

If you let fear rule you, you’re depriving not just yourself, but others of your greatness. So stop wavering. Stop worrying. Stop hesitating.

When building your personal brand, the first step is always the hardest. Start believing — then act.

Interested in learning more about what it takes to build a powerful personal brand? 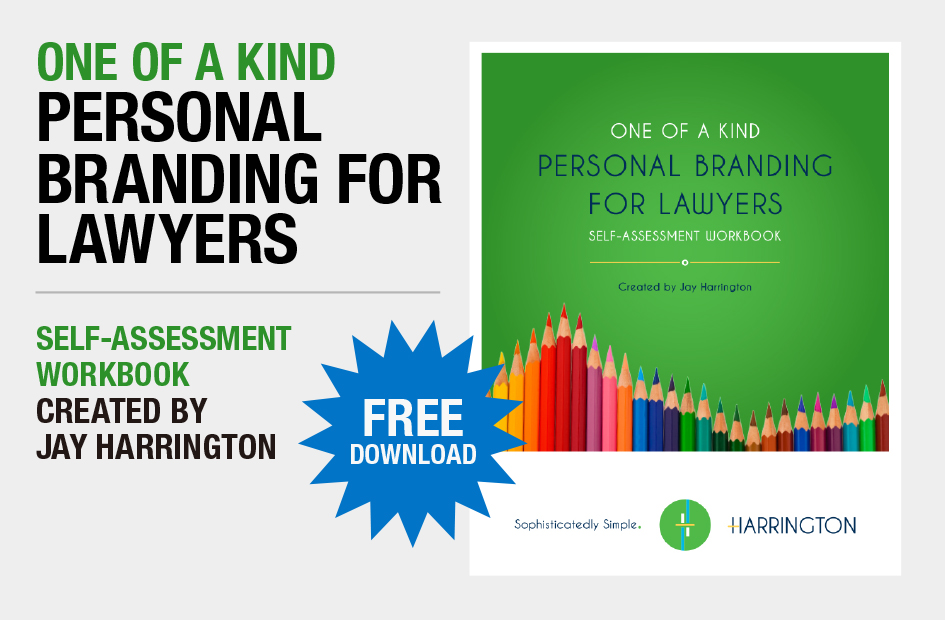 Download Jay Harrington’s FREE “Personal Branding for Lawyers: Self-Assessment Workbook” to gain a deeper understanding of how to assess your unique strengths and weaknesses as a lawyer. The questions in Jay’s new Workbook are derived from his book “One of a Kind: A Proven Path to a Profitable Legal Practice” and are intended to help spark new ideas about how you build your brand and your practice. 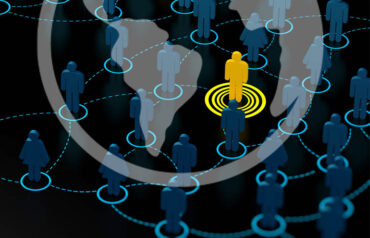