Big social media faux pas are not uncommon these days. From politicians to airlines to big brands, no one seems immune to a misguided post that goes viral and is ultimately shared with the world.

Lawyers, generally late-adopters, are just now beginning to understand how social media fits into their branding, marketing or communications strategy. And they face the double learning curve: understanding social media etiquette and how to use it in accordance with the rules of professional conduct. But that doesn’t mean you should put the etiquette piece second to the ethical piece. Using social media incorrectly or ineffectively can be just as damaging to your professional reputation — potentially worse.

The key to using social media effectively and ethically comes down to one thing: expectations.

If you understand what social media users expect — and, just as importantly, what they don’t expect — you are likely to be both effective and ethically compliant.

At its core, social media is about authentic engagement.

Social media users, be they readers, listeners or gawkers, are seeking authentic voices among the barrage of information noise they face every day. Pitching, soliciting, bragging or faking are quickly dismissed or ignored online.

Similarly, social media users are looking to be engaged. Social media not only is designed to connect people, it actually incentivizes them to engage with each other. This is a new marketing paradigm — and a different type of marketing for lawyers.

Before social media, nearly all lawyer advertising used a one-way “outbound” methodology. For most advertisers, outbound media became a way to shout at the world about how good their products were. Or, in the case of lawyers, how good their credentials, win-rate, toughness or legal services were. The media didn’t really facilitate two-way dialogue.

Social media is drastically different. It’s not a one-way communication medium. It’s an engagement medium. And it’s not even a two-way conversation, but a multi-way one. And this is where lawyers frequently fail. Instead of using these platforms to engage they use them for one-way outbound communications — the same way they’ve always marketed their firms. They shout at the world about how great they are and use social media to solicit business the same way they once used television ads or the phonebook.

For this reason, many lawyers are ineffective or even unethical when using social media.

But you don’t have to take my word for it. Here are five examples of lawyers and law firms failing to understood what social media users expect.

1. Following no one. One of the best examples of a social media facepalm by a law firm is the Skadden Arps Twitter account. Skadden, rather overtly, seems to believe that Twitter is a one-way communication medium. They don’t follow anyone on Twitter. They have only followers. This reminds one of the old adage about passing the ball in American football: There are only three things that can happen when you throw a pass and two of them are bad. There are only two reasons that Skadden follows no one and neither of them results in the firm looking “good.” Beyond appearing unaware that the medium exists precisely to encourage engagement, it also comes off as quite arrogant — an accusation that lawyers would do well to try to minimize. Does Skadden think there is no one worth listening to on Twitter?

2. Using spammy marketing text. Many lawyers are on social media because they’ve been told they “have to be.” A decent subset has let their marketing department or an outsourced marketing resource handle (read automate) their social media. Frequently this results in hashtag-filled, nonsensical or repetitive posts that are unwelcome, questionably effective and arguably unethical.

These three Tweets — completely coincidentally — ended up next to each other in my searching for examples of lawyer social media usage. Something seems suspicious. 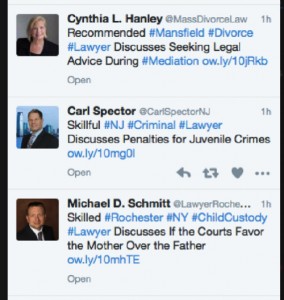 The similarities here might just be coincidence, but remember social media users are expecting authentic engagement. Spammy, repetitive and incoherent posts are neither authentic nor engaging.

3. Using social media as a megaphone. Kudos to the lawyers who do try to adopt social media and actually sign up for a service. That’s a great first step. Where many fall down, though, is when they apply a “set it and forget it” mindset. Remember, users are expecting “engagement.” If you are on social media, you should plan to engage and respond to the interactions and conversations happening there.

One common example is lawyers’ responses to negative reviews on sites such as Avvo or Yelp — or, more significantly, their silence. The reasons lawyers stay silent are varied but, unfortunately, they often relate to an unwillingness to engage online. A lot of lawyers prefer to simply ignore negative online feedback rather than understand how to appropriately respond to it. Similarly, there are a number of lawyers and firms who have the kind of spammy and repetitive posts mentioned above; or with whom others have attempted to engage on social media only to have those attempts ignored.

Lawyers, if you are going to sign up for social media, you need to engage others there.

4. Leaving professionalism at the office. Using social media to expand your online presence effectively requires remembering and adhering to your general professional duties as well as your legal ethics duties. As I’ve said, by meeting social media users’ expectations, most lawyers will generally adhere to the rules of professional conduct.

Despite the fact that online meltdowns and feuds frequently get publicity, they aren’t generally good for a lawyer’s business. Further, they can end up being seriously damaging when they either go viral or violate professional ethics rules. Two examples:

It might not cross the professional ethics line, but name-calling and bounty hunting online is not the way to enhance your brand. While this two-word review speaks for itself, with social media it’s wise to remember that there are hundreds, if not thousands, of readers who will be much more put off by the lawyer’s vehement response than by the negative review itself. Mr. Van Dyke may feel targeted, or even feel professionally wronged by this review, but handling it with decorum is the far better choice in the long run.

If Van Dyke didn’t cross the line ethically, the lawyer in In re Skinner certainly did. Having received a negative client review online, Attorney Skinner posted on the internet personal and confidential information about the reviewing client that had been gained in her professional relationship with the client. After the Georgia Supreme Court rejected her plea for a “review panel reprimand,” the lowest form of discipline in Georgia, Skinner was issued a formal public reprimand.

These misfires are pretty obvious, but it’s important to remember that social media has dramatically reduced the distance between the angry thoughts and ideas in one’s head and the rest of the world. While lawyers used to shout at the car dashboard after a bad day, the internet provides a close and dangerously powerful medium to “vent before you think.”

Ultimately, even this comes back to expectations: Social media users expect engagement, but they still expect lawyers on social media to fully live up to their expected and actual professional obligations.

5. Ignoring expectations. These facepalms may lead you to believe social media fails are more the rule than the exception. While that may be true among lawyers at this moment in time, it is certainly not true across industries. You can find many examples of excellent social media use from which to draw. The key, as successful users have learned, is understanding and meeting your audiences’ expectations. Do that, and hands will rarely meet faces for the facepalm when your followers read your social media posts.

Dan Lear is Director of Industry Relations for online legal marketplace Avvo. He is a lawyer, blogger and legal industry gadfly. As a technology-focused business lawyer he advised companies from startups to the Fortune 100 and helped develop agreements and terms for early cloud services offerings well before the notion of “the cloud” had entered the common cultural consciousness. Since his transition from tech lawyer to legal technologist, Dan has been featured in legal industry press and in 2015, named to the Fastcase 50, preceded by being honored with the Washington State Bar Association President’s Award in 2014. Follow Dan@rightbrainlaw.

It’s Not You, It’s Me: Why Law Firm Advertising Fails
Three Tips for Becoming More Resilient

LinkedIn Profile Update: How to Stand Out in 4 Simple, Achievable Steps

Tea Hoffmann: Here's how to conduct a step-by-step LinkedIn profile update — because when your business is running on virtual connections, a stale profile isn’t going to cut it.

Knowing Is Half the Battle: Pro Tips for Your First Assignment as an Associate June 22, 2022

How Lawyers Should Respond to Cognitive Decline in a Client June 22, 2022