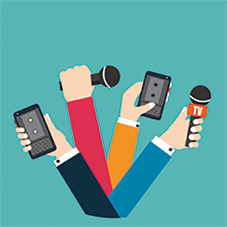 Acing the Interview: How to Behave With the News Media

What’s the secret to being a great interview? Typically, of course, you have to deliver a real, relevant story “of high consumer interest” to get the news media to pay any attention to you at all. But what if the media does come to you? Let’s imagine you get a call from a reporter who wants your commentary on a major criminal trial that’s been in the news. You’ve been selected because you are a respected criminal attorney — and now you’re on.

Related: Five Stories to Get Your Name in the Press

Rules for Getting the Interview Right

Here are a few rules — written and unwritten — for a productive conversation with a representative of the news media. These interview do’s and don’ts pretty much apply no matter what your particular area of law may be.

Once the interview ends, feel free to ask “How did I do?” If you enjoyed the experience, be sure to tell them you’d be pleased if they called you again. If you were good, you might become a regular. That’s the ultimate goal. And it’s not going to hurt your practice at all.

If they don’t invite you back, reread this article. Maybe it was that tie.

Related: I Hate Talking to Reporters! Ask the Experts from the Legal Marketing Association