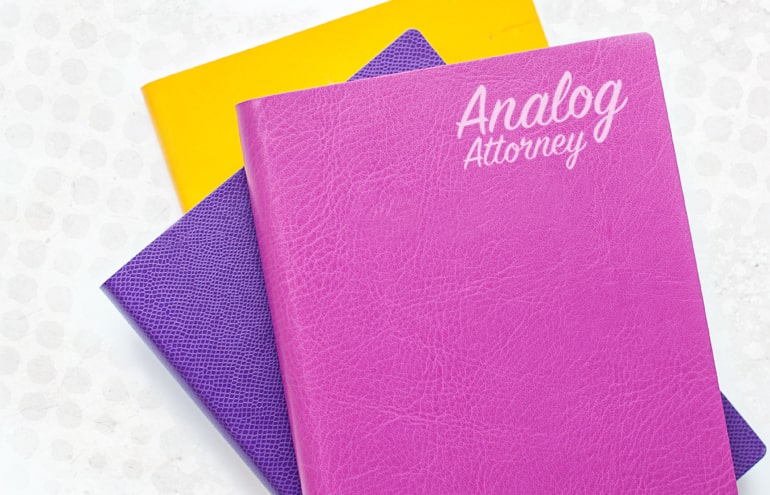 You May Wonder Why Anyone Needs Undated Planners

I get that. It feels redundant, and it would be if you were just repeating the schedule you’ve already created in Outlook.

You can’t just accept a meeting with Carol from acquisitions to go over interdepartmental audits, then show up with your hands in your pockets. You have to prepare. You have to sketch outflow charts. You have to write “I AM NOT THE ENEMY, CAROL” in the margins. It’s thinking on paper. However, this thinking thing can get weird.

Not everyone thinks in a straight line, and not everyone sees time the same way. While your computer keeps your calendar tidy, you still have to develop ideas and list materials before your meetings and work in that temporal space, and maybe the way you do that is … unnatural.

Some People Can “See” Time

It’s called calendar synesthesia. (If you are one of these people, Marvel comics would like a word because superheroes are a commodity.) When people with this phenomenon think of a year, they see the entire year in their mind’s eye. Not like a cloudy, amorphous concept of a calendar but an actual detailed calendar just floating there in the middle of the room. An article from New Scientist explains it perfectly:

Heidi, another calendar synaesthete, sees the year as a backwards C hovering before her, with January at one end of the horseshoe and December at the other. When she thinks of a date she feels herself travel along the calendar to the right spot. She has a separate, hoop-shaped calendar for days of the week. Both have been part of her life for as long as she can remember.

And Some of Us Have “Time Blindness”

We are to time what Roseanne Barre is to the national anthem. I am one of these people, and let me tell you; it can be a problem in an industry that runs on concrete deadlines. I don’t conceptualize time the way other people do. In my mind, the period between the beginning of a monthlong task and the last day is the same, every day, until the last day. Then I use the overwhelming power of pure panic to produce in six hours what I had eight weeks to accomplish. (I sure hope my editors don’t see this.)

This Is Where Blank Planners Help

If you have a mind that Disney would animate as a meth-addled squirrel, your planner notes probably tend toward the creative end of the spectrum. Still, the squirrel needs wrangling. You might think to yourself, “Well yeah, a structured day planner is perfect for that.” And you might be right. But in my experience, it is far more productive to work with the squirrel than against it.

The squirrel will not be tamed.

For years I tried to manage my time using one of those expensive pre-formatted seven-ring daytimers. I loved that thing. It was luxurious. It was bound in embossed leather, had an easy-to-read light green print, was designed by angels, and even had a plastic shuttle with a pre-formatted card I moved day by day.

This planner held the promise of order. It came with a book and classes and a philosophy, and it was amazing. Or it would have been if I’d used the damn thing right.

Instead, I would linger on Tuesday’s page all the way to the following Monday, and I still wouldn’t have everything done. By Tuesday morning, the page would be covered in doodles, phone numbers, and notes to myself like “Send Fred proofs/don’t yell.”

Which is fine. Your planner is personal. It’s not your work.

Your planner isn’t your work. It’s your brain talking about your work. It turns out some people organize better with ranged pages instead of dated pages, so spending $100 on a Franklin Covey system is a waste of money.

What I need is blank paper, a ruler and a vague idea. I need a creative planner.

Creative professionals — not just people creating art, but professionals who work creatively — love to build planning structures. I am one of those people who can nerd out on AirTable or Excel, building an editorial calendar with remarkable automation, interconnectivity and reach, and then … forget to use it.

I keep coming back to my cheap legal pads and undated planners because nobody makes a daytimer called “The Bull Garlington Time Blindness-Based Mostly Doodling Planner and Coloring Book™.”

We all work differently: Maybe detailed time management tools are your jam.

I understand I’m writing mostly to time management wing nuts, not 43-Folders devotees. Maybe you have a three-tiered system of apps and an executive daily planner as thick as a dictionary. Maybe you use highlighters and index cards and page points and a running footer. Maybe you’re the most organized person who’s ever very purposefully strode across this verdant sphere.

Allow me a moment while I applaud. And allow me another moment to suggest you might need to mentally detach from the bracken of your project priorities tree and let your brain spin its wheels for a minute.

Using an undated planner to fan your thoughts out on a page like you’re playing bridge will free you to shuffle and reprioritize without breaking the rigid cage of your other systems. It’s a little freedom in your day — the blank space that makes the music better.