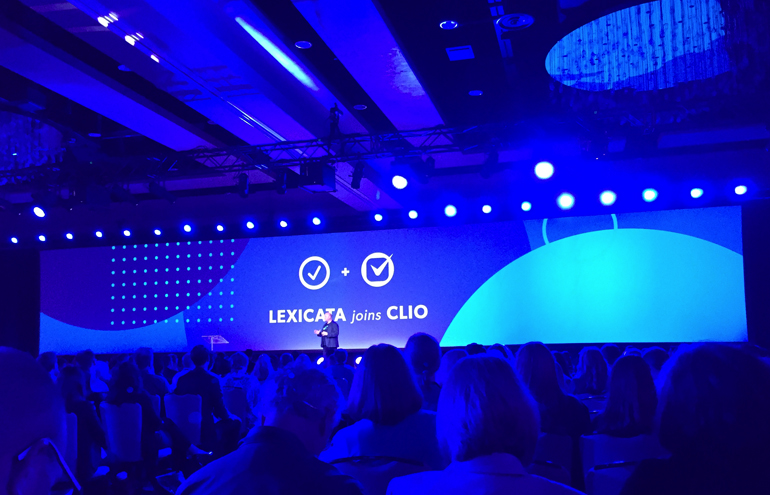 In a decidedly awkward merging of two slightly differentiated checkmark logos, Clio has acquired Lexicata. So that you’re up to speed, Clio is a law practice management (LPM) software system and Lexicata is a customer relationship management (CRM) software system. There are lots of LPM software systems out there, among which Clio styles itself the global leader. There are not many customer relationship management systems that have been trained on the legal industry (there are CRMs that are global powerhouses, like Salesforce — they just aren’t focused on legal). And, of those legal CRMs, Lexicata has been, by far, the most successful. (I’ve reviewed the software previously, in this space, if you need a refresher or a rundown.)

As of the start of the recent Clio Cloud Conference, held earlier this month, Clio and Lexicata are one. This is significant for a number of reasons and underscores motivations on both sides.

What you may be asking yourself is, just why did Clio acquire Lexicata? Well, I’m here to answer that question.

This is Clio’s first acquisition. And, that’s not a small thing. Clio has been around for just over 10 years and assuredly has had opportunities to execute on acquisitions. One reason for Clio to make this move now is not just to access a stage of the law firm client lifecycle they have not previously focused on, but to also signal that they are in the market for acquisitions.

Clio started out as a straight software company. It sold one product: law practice management software. Over time, Clio opened up its API to allow other software to integrate with Clio. Now, Clio has a multitude of integration points. Clio has become a platform. Its LPM software still exists and is still being updated, but Clio now provides a marketplace through which related and integrated products can be bought and sold.

Clio’s purchase of Lexicata strengthens its platform. Now, for companies willing to build onto Clio, there is an obvious out: acquisition by Clio. This will encourage software developers to build products for Clio’s platform. For Clio, the advantage is that they get software developers to try new and interesting things and can then cherry-pick the best ideas for potential acquisitions. Because why would you build it yourself, when you can buy it later? This has the added side benefit of allowing Clio to spend more resources focusing on its case management software (rather than chasing extended product offerings), which will allow for a standard of quality to be maintained over time. For Clio, this is like shooting fish in a barrel with a very expensive rifle.

Now, you might be asking yourself the opposite question: Why would Lexicata sell to Clio?

Well, building software for a particular platform partner is a double-edged sword. Lexicata was able to build a user base, in large part, based on its affiliation with Clio. (This is not a criticism — credit goes to Lexicata, which is run by two very bright gentlemen, for being the first to figure out the Clio acquisition puzzle.) And, this is borne out by the numbers: It turns out that roughly half of Lexicata’s users were also Clio users. So, here’s the rub: If Clio built out its own viable CRM feature inside of Clio, the obvious choice for traditionally cost-sensitive lawyers would have been to opt into Clio’s new feature and opt out of Lexicata. Over time, that would have eviscerated Lexicata’s market share. And, Clio had started work on a CRM feature, called Grow. Lexicata will now become Grow. The writing, as was known to King Belshazzar long ago, was on the wall.

Get It Right the First Time

So, there’s a business case, clearly, for why Clio bought Lexicata. But is there a product fit? Well, yeah, because no LPM software company has really gotten CRM right so far. Most have rudimentary CRM features, at best. Kind of like: identify the referral source, then filter for that in a basic report … and, really, that’s it. Acquiring a full-fledged CRM product gives Clio the ability to convert Clio Grow into a complete CRM system inside of or adjacent to Clio.

One reason why this hasn’t happened before is that no other LPM company has the wherewithal to do something on this order of magnitude. Clio has a large user base, lots of revenue and (probably most importantly) a mature platform from which it could pluck a CRM of the level of a Lexicata. There are a slew of reasons why LPM software providers have not, to this point, focused on CRM features. Maybe they wanted to focus on client management and excel at that, rather than turn an additional focus to lead management. Maybe there was a desire, but not enough capital or internal buy-in. Maybe the corporate vision was not broad enough, or didn’t extend far enough.

Whatever the reason, the question now is whether Clio’s acquisition of Lexicata will force the hands of other vendors who wish to compete on that differentiation point. Legal tech vendors respond to what other legal tech vendors do. Abacus purchased HotDocs shortly after LEAP and Smokeball entered the United States offering case management and document automation in one package. Tabs3 just bought CosmoLex as a bridge to cloud-based LPM, and it found a company that shared a similar focus on trust account management.

So, will this be like when there’s that first run on quarterbacks in your fantasy football draft? Will Clio’s move spur competitors to build or acquire (better) CRM services?

It’s About the Client Lifecycle, Silly

Clio has, to this point, done well to acquire a significant market share in client management for lawyers. But, it’s clear from the Lexicata acquisition, and from the marketing focus of its latest Legal Trends Report and various and sundry other public proclamations surrounding the 2018 Clio Cloud Conference, that the company’s next step is to try to dominate the pre-client management market.

Clio wants your leads, too.

Lexicata, and all CRMs, are lead management software. So this all makes sense, right? Owning the entire client lifecycle is where you want to be if you’re a software company with visions of global domination. What better feeder for a case management software provider than to acquire a CRM company? For your existing clients, you’ve acquired yet more real estate in their workflows by controlling the lead and client management process. For non-Clio clients, you’ve offered another clear entry point into your system, if those potential clients are in the market for a lead management system. It’s easier to yoke your lead and client management together, and Clio is about to provide a one-stop shop for that purpose.

Clio is also slow-playing a referral network. Now, consider this: What space exists between leads and conversions? That amorphous netherworld where a law firm doesn’t want a case, but that same case would be valuable to another law firm. There is no existing system for managing those referrals between lawyers outside of ad hoc attorney networks. Enter Clio, with its baseline usership of 150,000 legal professionals. With the announcement of, and what appears to be a soft launch for, the Clio Referral Network, Clio users can now process referrals through Clio Grow or through the Clio website — clio.com/referral-network.

Not only is this another compelling reason to continue or start using Clio for case management, but it’s also an initial entree point into a market that is massively underserved. I predict that the Clio Referral Network will become the biggest play to come out of Clio’s spate of announcements at this year’s conference. If done correctly (meaning, if leads can be routed intelligently), the Clio Referral Network stands as a bridge for unlocking so much untapped law firm revenue that it’s staggering to think about. And, while at this moment, it doesn’t appear that Clio is looking to monetize this service, they could certainly do so, via a lead generation service model, if they wished.

There was, as there is at every legal conference in the universe, much discussion at Clio Cloud Conference about the latent revenue available to law firms pending a viable solution for the access to justice (#A2J) problem. But, frankly, the potential law firm revenue lost to poor referral management is also gigantic, and more readily solvable.

Ever since Clio aggressively launched as a first mover in the field of cloud-based law practice management, they’ve taken a lot of first steps. This is the next step.

Show Me (More Than) the Money! Motivating Marketing Behavior
Five Ways to Think Differently About Stress